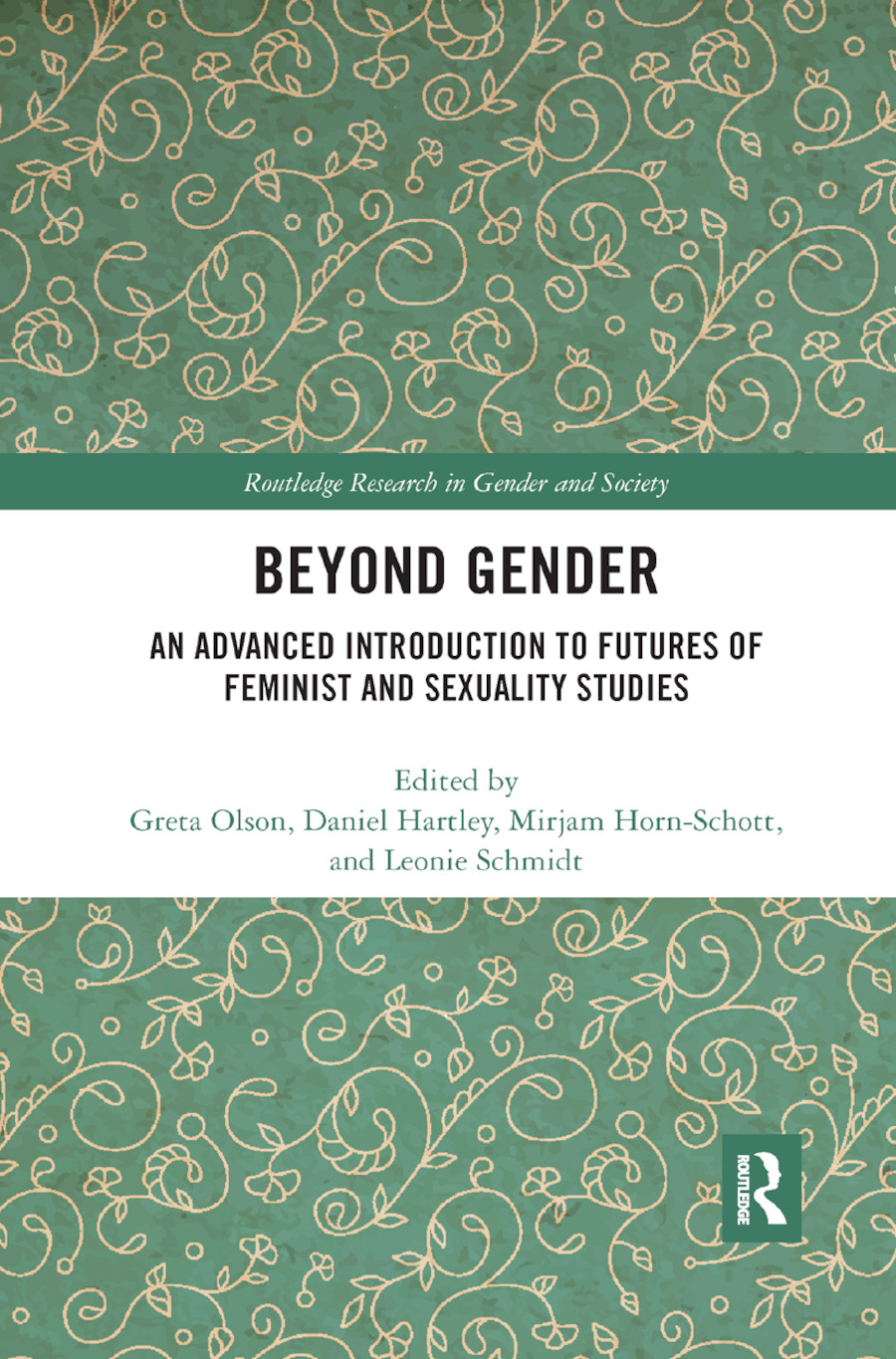 An Advanced Introduction to Futures of Feminist and Sexuality Studies, 1st Edition

Scholars and activists often narrate the history of gender and feminism as a progression of "waves," said to mark high points of innovation in theory and moments of political breakthrough.

Arguing for the notion of multiple futurities over that of progressive waves, Beyond Gender combines theoretical work with practical applications to provide an advanced introduction to contemporary feminist and sexuality research and advocacy. This comprehensive monograph documents the diversification of gender-related disciplines and struggles, arguing for a multidisciplinary approach to issues formerly subsumed under the unified field of gender studies. Split into two parts, the volume demonstrates how the notion of gender has been criticized by various theories pertaining to masculinity, feminism, and sexuality, and also illustrates how the binary and hierarchical ordering system of gender has been troubled or overcome in practice: in queer performance, legal critique, the classroom, and textual analysis.

Taking a fresh approach to contemporary debates in feminist and sexuality studies, Beyond Gender will appeal to undergraduate students interested in fields such as Feminism and Sexuality Studies, Gender Studies, Feminist Theory, and Masculinity Studies.

Beyond Gender lucidly reviews how 21st-century feminist theories and practices have moved beyond Butlerian gender studies into a more deeply politicized engagement with heterogeneous intersectional identities and movements. Interdisciplinary in scope, the handbook usefully posits an evolution beyond "second" and "third-wave feminism" into what the editors call a "decolonized queer feminist future."

Although there have been many recent publications on gender theory, there has not yet been a volume with the expansive scope and ambition of Beyond Gender. It provides a thorough advanced introduction to the field as well as an updated and rigorous scholarly overview of contemporary debates in queer, intersectionality, transgender and decolonial feminism. A must read!

Sara R. Farris, author of In the Name of Women’s Rights. The Rise of Femonationalism, Duke University Press, 2017

How can we theorize gender, sex and sexuality in a post-Butler era? What does intersectional feminist and queer scholarship look like today? What does it mean to queer and decolonize feminist theory and praxis across shifting social, cultural, economic and geo-political contexts and relations? Grappling with these vital and challenging questions, Beyond Gender offers a novel, incisive and generative vision of, and guide to, contemporary feminist and sexuality studies.

Carolyn Pedwell is Reader in Cultural Studies at the University of Kent, UK. She is an Editor of Feminist Theory journal and the author of Affective Relations: The Transnational Politics of Empathy (Palgrave, 2014) and Feminism, Culture and Embodied Practice: The Rhetorics of Comparison ?(Routledge, 2010).

Despite so many announcements of the death and demise of feminism and queer theory, they are prodigiously still with us. But in what form, in which guise? The collected volume Beyond Gender offers a valuable contribution to setting the terms of the present-day critique, and directs us towards decolonized feminist and queer futures.

Arguing for decolonized and radical queer feminisms; this handbook takes on the ambitious task of moving "beyond gender studies" and destabilizing the concept of ‘gender.’ In so doing it puts forward a number of epistemological challenges to mainstream feminist and queer scholarship and praxis arguing for closer engagement between queer/sexuality studies and decolonial feminisms. As a volume aimed at advanced study but also based on real life experiences, Beyond Gender opens up new and exciting areas for reflection and debate with important implications for future thought and action across generations.

This book is an important contribution which emphasises, celebrates, and problematises the plurality of current political, methodological, and theoretical approaches to gender and sexuality studies. The diverse and exciting contributions will challenge what many scholars in this field too often take for granted and, I am certain, provoke lively and fruitful debate

Matthew Weait is Professor of Law and Society and Dean of the Faculty of Humanities and Social Sciences at the University of Portsmouth, UK

Beyond Gender: Towards a Decolonized Queer Feminist Future

1. The Rise and Fall (and Rise) of Mars and Venus in Language and Gender Research

3. Where Are We Going, Where Have We Been, Where Do We Return to, Repeatedly? The Seriality of Feminist Critique and Gender Studies

4. "Slavery to an Assembly Line is Not a Liberation from Slavery to the Kitchen Sink": Assessing Social Reproduction Theory’s Challenge to Liberal-Feminist and Classical-Marxist Paradigms

5. Modes of Being vs. Categories – Queering the Tools of Intersectionality

Part II Forms of Practice – Doing the ‘After’ of Gender Studies

8. Unseemly Desire – Disciplining and Othering the Sexuality of Women in Later Life

11. The "Yes" Which Is Not One: Consent, the Law, and the Limits of False Consciousness Feminism

13. "It’s a space shuttle!" Opening up Queer* Spaces through the Performing Arts

Greta Olson is Professor of Cultural Studies at the University of Giessen, Germany, and general editor of the European Journal of English Studies.

Daniel Hartley is a Leverhulme Postdoctoral Fellow in the School of Languages, Cultures and Societies at the University of Leeds, UK.

Leonie Schmidt is a lecturer and PhD fellow in English and American Literature and Culture at Justus-Liebig-University Giessen, Germany.