Beyond Security, Ethics and Violence
War Against the Other 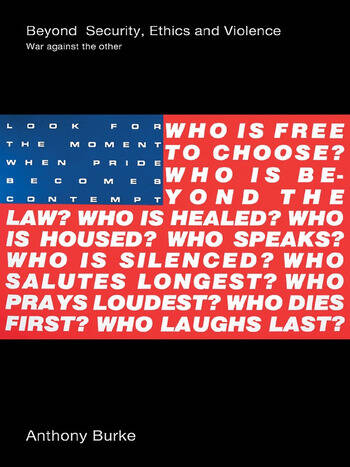 Beyond Security, Ethics and Violence: War Against the Other

In a world plagued by war and terror, Beyond Security, Ethics and Violence sounds a warning: not only are global patterns of insecurity, violence and conflict getting ever more destructive and out of hand, but the ways we understand and respond to them will only prolong the crisis. When security is grounded in exclusion and alienation, ethics licenses killing and war, and freedom is a mask for imperial violence, how should we act?

Anthony Burke offers a groundbreaking analysis of the historical roots of sovereignty and security, his critique of just war theory, and important new essays on strategy, the concept of freedom and US exceptionalism. He pursues critical engagements with thinkers such as Giorgio Agamben, Hardt and Negri, Emmanuel Levinas, Carl Von Clausewitz, Jean Bethke Elshtain, Michael Walzer, Michel Foucault and William Connolly. Combining a diversity of critical thought with analyses of the War on Terror, Iraq, the Israeli-Palestinian conflict, the Vietnam War, the Indonesian crisis, globalization and the new drive for empire, Burke refuses easy answers, or to abandon hope.

This innovative study will be of interest to students and researchers of politics and international relations, security studies, social and cultural theory and philosophy.

Introduction: Security, Freedom and Death  Part 1: Security  1. Aporias of Security: From the Leviathan to the Security State  2. Poetry Outside Security: The Jagged Edges of Southeast Asia  3. Security After Security: Israel, Palestine and the Wall  Part 2: Ethics  4. Strangers without Strangeness: Power and Difference between Australia and Indonesia  5. The Perverse Perseverance of Sovereignty  6. Just War or Ethical Peace? Morality and Strategic Violence After 9/11  Part 3: Violence  7. Violence and Reason on the Shoals of Vietnam  8. Iraq: Strategy’s Burnt Offering  9. Freedom’s Freedom: American Enlightenment and Permanent War

Anthony Burke is Senior Lecturer in the School of Politics and International Relations at the University of New South Wales, Sydney.