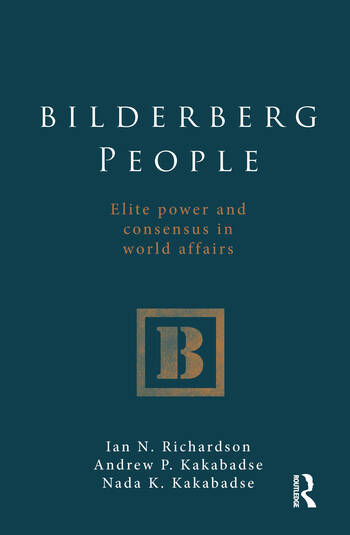 Bilderberg People explores the hidden mechanisms of influence at work in the private world, and personal interactions, of the transnational power elite. It is not concerned with conspiracy theories; instead it is about certain fundamental forces that shape the world in which we live. These forces, with their power to bring about transitions in emotion and preference within, and beyond, the elite community have potentially profound implications for all of us.

Through exclusive interviews with attendees of the most prestigious of all informal transnational networks – Bilderberg – this book provides a unique insight into the networking habits and motivations of the world’s most powerful people. Moreover, it demonstrates that elite consensus is not simply a product of collective common sense among the elite group; rather, it is a consequence of subtle power relationships within the elite circle. These relationships, which are embedded in the very fabric of elite institutions and interactions, result in a particular brand of enlightened thinking within the elite community.

This exciting new volume sheds light for the first time on the critical question of who runs the world and why they run it the way they do.

Ian Richardson is a researcher at Stockholm University Business School and a Visiting Fellow at Cranfield University School of Management. His research interests include global governance, transnational policy networks, business and political elites, transnational corporations, multi-stakeholder collaboration, power and consensus in organizations, and political marketing. As a former business leader and entrepreneur in the European digital information sector, he has an ongoing interest in innovation and regulation related to the internet and continues to advise organizations within the sector.

Andrew Kakabadse is Professor of International Management Development, Doughty Centre, Cranfield University’s School of Management, UK. Recognized as a world authority on leadership and governance, Andrew has held and also holds visiting appointments at the Copenhagen Business School, Denmark, Universite Pantheon Assas, Paris, France, Centre for Creative Leadership and Thunderbird, the Garvin School of International Management, United States, University of Ulster, The Windsor Leadership Trust, UK, Institute of Management Economics and Strategic Research, Kazakhstan, and Macquarie Graduate School of Management, Australia. He has consulted and lectured in every region of the world. His bestselling books include The Politics of Management, Working in Organizations, the Wealth Creators, Leading the Board, Rice Wine with the Minister and Leading Smart Transformation: A Roadmap to World Class Government.

Nada K. Kakabadse is Professor in Management and Business Research at the University of Northampton, Business School and Visiting Professor at US, Australian, French, Kazakhstani and Chinese universities. She has co-authored seventeen books (with Andrew Kakabadse) and has published over 140 scholarly articles. Her current areas of interest focus on leadership, strategy, boardroom effectiveness, governance, CSR and ethics, and ICT impact on individual and society. Nada is co-editor of the Journal of Management Development and the Corporate Governance journal.

"Bilderberg People shows convincingly how the transnational elite policy making community works and whose interests it serves. This book throws light on many baffling foreign policy issues happening all around us today".

"Bilderberg People does a great service to the cause of deepening democracy […] it is high time that the ways in which a more equitable and transparent global order can be achieved, is placed on the agenda. This book is a solid contribution to that process".

‘The mechanisms of consensus building and maintenance apply not only to world affairs but also to the construction an ‘ever closer Union’ in Europe. It makes this unique book even more fascinating, if not a bit worrying, reading".

"An illuminating excursion into the intricacies of power and economics and the esotericism that shape global affairs - today and for the future."

"At last - a serious study of power elites, with a human touch. Timely and necessary."

"Any modern analysis of the relationships between partnership, collaboration, consensus and legitimacy can only be of benefit to those of us trying to grapple with 21st Century threats across the National and International Policing Community. Add elites into the equation and you have an interesting mix!"

"The first analysis of the dynamics of consensus building among the world elite- fascinating reading - highly recommended!"

"Bilderberg People deftly probes a transnational, elite network; places this intriguing process in theoretical context; and relates it to current policy issues in Europe, the United States and beyond."

"What looks like accidental and dispersed forces that shape world politics, might not be so random after all"

The authors of the book "Bilderberg People: Elite Power and Consensus in World Affairs" challenge the fundamental existential problem of the modern world: institutional disharmony between the power relationships at the global scale, from one side, and the ethical imperatives of globalization, from another -- the later still to be formed in the environment dominated by the ideology of neo-liberalism. This book -- informative, analytical and comprehensive -- definitely will be demanded by the community of thinking people.

This book is an absolute must-read for the globally concerned scholar with an interest in exploring how contemporary politics and the international system of governance seems incapable of creating coherent collective responses to transcendental global problems. The authors ask the critical question of how change can be brought about without destabilising existing, and advantageous, socio-economic establishments? By providing a first time insight to the powerful Bilderberg eltite network, the authors suggest that transnational elite networks provide dynamics of power and consensuses that serve as a critical mechanism for facilitating change in world politics. Acknowledging the obvious lack of democratic governance, this book attempts to bring understanding to the underlying powers, control and direction of this influential subpolitical activity.

If privatization can be defined as a situation where private standards are turned into public norms without proof of their representativity, Bilderberg People is one of its sources...

"From elite perspectives seeking to control mass behaviour, this exciting study turns the focus back on global elite behaviour itself".

"An intelligent, informative and level-headed analysis of the real influence of the worlds' leading "elite networks".

"So many words are said and written about "Bilderberg Group". But the more that is said and written, greater becomes the mystification of this theme and thereafter the savor of society. I dare say that the offered book, the co-author of which is a remarkable academician with singular talent, Mr. Andrew Kakabadse, will clarify this issue and give an answer to those questions"

"Bilderberg People" promises to expand both the theory and data available on the role of elites in shaping international politics. In a globalised world in which elites play a determining role, this book helps understand and influence this role of the elites".