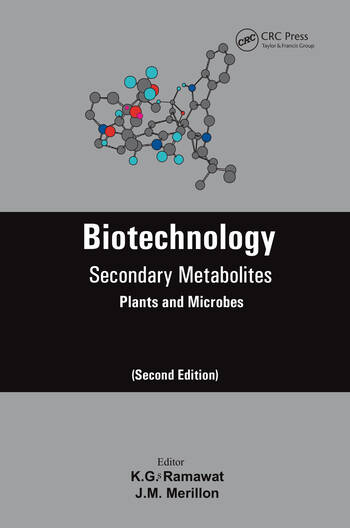 This book provides new information relating recent advances made in the field of plant secondary products. Besides the updation of chapters this edition also includes chapters on secondary metabolites of microorganisms (fungi and lichen).

Professor K.G. Ramawat (born 1952) did his Ph.D. in 1974 (Botany: Plant Biotechnology) from the University of Jodhpur, Jodhpur, India and joined as a faculty member in 1979. He later joined M.L. Sukhadia University as Associate Professor in 1991 and became Professor in 2001. He served as Head, Department of Botany (2001-2004), In-charge, Department of Biotechnology (2003-2004), member task force on medicinal and aromatic plants, Department of Biotechnology, Government of India, New Delhi (2002-2005). He did his Post-doctoral at the University of Tours, France (1983-85) and subsequently worked as visiting professor at the University of Tours (1991) and the University of Bordeaux 2, France (1995, 1999, 2003, 2006). He has published more than 100 research papers and review articles in reputed journals and books published by Academic Press and Springer Verlag. He has edited reference books on medicinal plants (Science Publishers, Enfield, USA) and Bioactive Molecules (Spinger Verlag, Germany). Prof. Ramawat has completed several major research projects and has supervised Doctoral theses of l6 students.

Professor J .M. Merillon (born 1953) did his M. Pharma (1979) and Ph. D. (1984) from the University of Tours, Tours, France. He joined the University of Tours as faculty member in 1982 and became Associate Professor in 1987 and a full Professor in 1993 the faculty of Pharmacy, Univeristy of Bordeaux 2, Bordeaux, France. He is currently group leader of 'study group on biologically active plant substances, InstituteoNineandWineSciences'with30scientistsandresearchstudents.Hehas published more than 80 research papers in internationally recognized journals and edited a book on Bio active Molecules (Springer Verlag, Germany). He is involved in research on vine and wine in France. Scientists from several countries work in his laboratory.