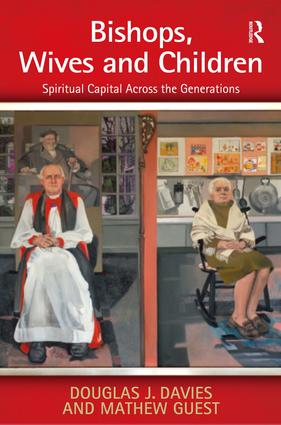 Christianity as a cultural force, whether rising or falling, has seldom been analysed through the actual processes by which tradition is transmitted, modified, embraced or rejected. This book achieves that end through a study of bishops of the Church of England, their wives and their children, to show how values fostered in the vicarage and palace shape family, work and civic life in a supposedly secular age. Davies and Guest integrate, for the first time, sociological concepts of spiritual capital with anthropological ideas of gift-theory and, alongside theological themes, use these to illuminate how the religious professional functions in mediating tradition and fostering change. Motifs of distant prelates, managerially-minded fathers in God and rebellious clergy children are reconsidered in a critical light as new empirical evidence offers unique insights into how the clergy family functions as an axis of social power in an age incredulous to ecclesiastical hierarchy. Bishops, Wives and Children marks an important advance in the analysis of the spirituality of Catholic, Evangelical and Liberal leaders and their social significance within a distinctive Christian tradition and all it represents in wider British society.

'This is a fascinating and insightful sociological study of the Church of England which deserves wide readership. The question it addresses - that of the transmission of spiritual capital across generations - is a crucially important one and its conclusions should be of interest to all those concerned for the good of English society.' The Rt Revd Dr John Inge, Bishop of Huntingdon 'There are many myths and misunderstandings about Bishops and their households which this wise and reflective book will go a long way to dispel.' The Rt Revd Kenneth Stevenson, Bishop of Portsmouth ’There is much to be learned here from the frankness with which hitherto unacknowledged problems are exposed. It is clear that this is a book that might profitably be read by all married bishops, and by other clergy, too, as a basis for self-examination… It deserves to be read, not least by those who see scope in themselves for becoming better clerical parents, as well as by those responsible for providing the contexts in which such parents live and work.’ Church Times ’…this is a solid, original and important work that deserves close reading. The study is an excellent example of how sociology might be applied to theological understandings.’ New Blackfriars ’Through new findings and a helpful review of existing knowledge, this book makes a valuable contribution to understanding of the lives of bishops and their families and the significant contribution that they have made to British culture in the twentieth century.’ Rural Theology ’… of interest to the practical theologian because of the questions it raises about the transmission of religious faith within the clergy family and the corresponding questions it raises about the lack of transmission in many modern families that do not share the same characteristics as the families investigated.’ Practical Theology ’However one analyses the spiritual capital flowing from episcopal homes, this research is a good a

The Revd Professor Douglas J. Davies is Professor in the Study of Religion at the Department of Theology, Durham University, UK and has, for the past three years, been Director of the 'Clergy and British Society' project. He has published widely on a variety of topics, including the rural church, Mormonism and pastoral theology. Among his many distinguished volumes are Death, Ritual and Belief: The Rhetoric of Funerary Rites (1997); The Mormon Culture of Salvation: Force, Grace and Glory (2000); Anthropology and Theology (2002); An Introduction to Mormonism (2003), and Church and Religion in Rural England, (co-author, with Charles Watkins and Michael Winter; 1991). Dr Mathew Guest is Lecturer in Theology and Society at the Department of Theology, Durham University, UK. From 2001-2004, he worked as Senior Research Associate to the 'Clergy and British Society' Project, taking particular responsibility for overseeing and managing the collection and analysis of empirical data. He has also published widely on contemporary British evangelicalism and on Christianity in general. He has co-authored Modern Christianity: Reviewing its Place in Britain Today (with Douglas Davies) (2000), co-edited Congregational Studies in the UK: Christianity in a Post-Christian Context (with Karin Tusting and Linda Woodhead) (2004), and is the author of Evangelical Identity and Contemporary Culture: A Congregational Study in Innovation (forthcoming).