Blacks, Mulattos, and the Dominican Nation 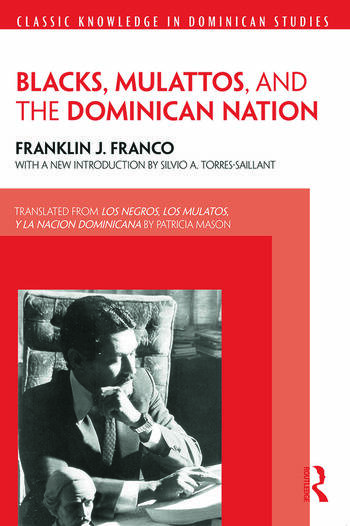 Blacks, Mulattos, and the Dominican Nation

Blacks, Mulattos, and the Dominican Nation is the first English translation of the classic text Los negros, los mulatos y la nación dominicana by esteemed Dominican scholar Franklin J. Franco. Published in 1969, this book was the first systematic work on the role of Afro-descendants in Dominican society, the first society of the modern Americas where a Black-Mulatto population majority developed during the 16th century. Franco’s work, a foundational text for Dominican ethnic studies, constituted a paradigm shift, breaking with the distortions of traditional histories that focused on the colonial elite to place Afro-descendants, slavery, and race relations at the center of Dominican history.

This translation includes a new introduction by Silvio Torres-Saillant (Syracuse University) which contextualizes Franco's work, explaining the milieu in which he was writing, and bringing the historiography of race, slavery, and the Dominican Republic up to the present. Making this pioneering work accessible to an English-speaking audience for the first time, this is a must-have for anyone interested in the lasting effects of African slavery on the Dominican population and Caribbean societies.

2. The Black Population and the National Consciousness

4. The Other Face of the Reconquest

"Finally! U.S. scholars and students interested in a fuller, more complex understanding of blackness in the Americas will have English-language access to Franklin J. Franco’s seminal account. Blacks, Mulattos and the Dominican Nation is indispensable reading for anyone interested in the relationship between slavery-based capitalism, competing colonial projects, and the development of racial systems and ideologies in the Americas. As importantly, Blacks, Mulattos and the Dominican Nation reminds readers that anti-Haitianism and negrophobia provide as much evidence of unremitting black freedom struggles on the island, as of the pathologies of white supremacy in the Hispanic Caribbean."

— Ginetta E. B. Candelario, author of Blacks behind the Ears: Dominican Racial Identity

"Franco’s classic study positions blackness as central to the evolution of Dominican national identity, and demonstrates the challenges black freedom and equality posed in the development of both popular and elite notions of citizenship."

— Linden F. Lewis, Presidential Professor of Sociology at Bucknell University, past President of the Caribbean Studies Association and editor of the anthology Caribbean Sovereignty, Development and Democracy in an Age of Globalization

"Franklin J. Franco’s analysis challenged the idea that Hispanic benevolence birthed racial harmony when he made enslaved people, violence, and plunder central to Hispaniola’s colonial history. Franco can now assume his well-earned place among English-language scholars who broke new ground in the study of slavery and the African Diaspora in the Americas."

"Written in 1969, Franklin Franco’s book remains an important synthesis of Dominican history during the colonial and Haitian periods. It illuminates Santo Domingo’s place as an extraordinary part of the Afro-Caribbean world: its role as the first slave plantation society in the Americas (in the 1500s); its mostly enslaved, maroon, and African-descended population since that time; and its political integration with Haiti, which was embraced by many Dominicans as a more liberal and modern nation during the early 1800s. A new introduction by Silvio Torres-Saillant situates this classic work beautifully and expansively in Dominican historiography."

— Richard Turits, author of Foundation of Despotism: Peasants, the Trujillo Regime, and Modernity in Dominican History