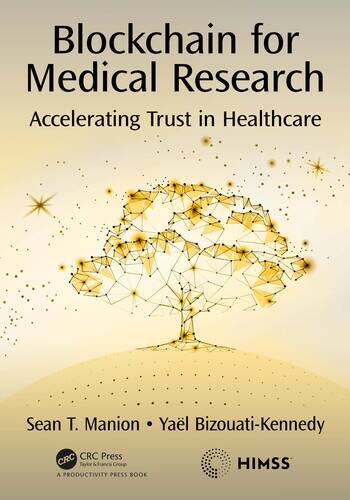 It takes 17 years on average to bring new medical treatments ideas into evidence-based clinical practice. The growing replicability crisis in science further delays these "new miracles." Blockchain can improve science and accelerate medical research while bringing a new layer of trust to healthcare.

This book is about science, its value to medicine, and how we can use blockchain to improve the quality and impact of both. The book looks at science and medicine from an insider’s perspective and describes the processes, successes, shortcomings and opportunities in an accessible way for a broad audience. It weaves this a non-technical look at the emerging world of blockchain technology; what it is, where it is useful, and how it can improve science and medicine. It lays out a roadmap for this application to transform how we develop knowledge about health and medicine to improve our lives.

In the first part, Blockchain isn’t Tech, the authors look at blockchain/distributed ledger technology along with critical trade-offs and current explorations of its utility. They give an overview of use cases for the technology across industries, including finance, manufacturing and healthcare, with interviews and insights from leaders across government, academia, and tech/health industry both big and start-up.

In the second part, Science is Easy, the authors look at science as a process and how this drives advancement in medicine. They shed a light on some of science’s shortcomings, including the reproducibility crisis and problems with misaligned incentives (i.e. publish or perish). They apply a breakdown of critical components to the functional steps in the scientific process and outline how the open science movement is looking to improve these, while highlighting the limit of these fixes with current technology, incentives and structure of science.

In the third part, DAO of Science, the authors look at how blockchain applied to open science can impact medical research. They examine how this distributed approach can provide better quality science, value-based research and faster medical miracles. Finally, they provide a vision of the future of distributed medical research and give a roadmap of steps to get there.

Sean Manion, PhD is a neuroscientist who spent nearly two decades in military health research and administration. He is now the co-founder and CEO of Science Distributed, a small business focused on exploring blockchain for academic research, co-editor of the journal Blockchain for Science published by Frontiers, and co-founder of the non-profit Blockchain in Healthcare Global, part of the IEEE International Standards & Technology Organization. Sean is a member of the HIMSS Blockchain Task Force, a member of the IEEE Standards Association "Standards for the Framework of Distributed Ledger Technology (DLT) Use in Healthcare and the Life and Social Sciences (P2418.6)," a fellow of the British Blockchain Association, and serves on the editorial review board for the peer-reviewed journals Ledger, the Journal of the British Blockchain Association, and Frontiers in Blockchain.

He lives in The Bronx, NY with distributed time in Pittsburgh, Baltimore, and DC.

is a former full-time financial journalist and editor. Her work has appeared in The Wall Street Journal, Financial News, The Financial Times, Business Insider and several other publications. She also worked as vice president-senior content writer for New York-based financial services firms, including New York Life and MSCI, where she led thought leadership efforts around several platforms. Most recently, she has been freelancing and writes among other things, about blockchain. Yaël holds a master’s degree in journalism from New York University and a master’s degree in Russian Studies/Russian Politics from Université Toulouse Jean Jaurès.

She originally hails from Toulouse, France.