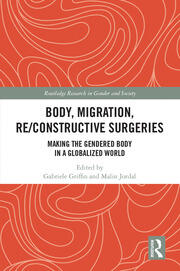 Bringing together an international range of case studies and interviews with individuals who have had genital re/construction, Body, Migration, Re/constructive Surgeries explores the socio-cultural meanings of clitoral re/construction following female genital cutting (FGC), hymen reconstruction, trans and intersex bodily interventions; and cosmetic surgery. Drawing critical attention to how decisions around such surgeries are affected by social, economic and regulatory contexts that change over time and across spaces, it raises questions such as:

Suggesting that conventional gender binaries are no longer adequate to understanding the quest for bodily interventions, this insightful volume seeks to give a greater voice to those engaged in gender body modification. It will appeal to students and postdoctoral researchers interested in fields such as Gender Studies, Social Studies, Sexuality Studies and Cultural Studies.

1. Psychosexual health after female genital mutilation/cutting and clitoral reconstruction: what does the evidence say?

2. An analytic review of the literature on female genital circumcision/mutilation/cutting (FGC): the Möbius strip of body and society for women with FGC

4. Resistance to reconstruction: the cultural weight of virginity, virility and male sexual pleasure

5. The meaning of clitoral reconstruction (CR) and female genital cutting among immigrant women asking for CR surgery in Sweden

6. The need for clitoral reconstruction: engaged bodies and committed medicine

8. ‘If you can afford it, you can do it’: deliberations of people in Burkina Faso on clitoral reconstruction after female genital mutilation/cutting (FGM/C)

9. Hymen reconstruction surgery in Jordan: sexual politics and the economy of virginity

10. Hymen reconstruction as pragmatic empowerment? Results of a qualitative study from Tunisia

12. Routes to gender-affirming surgery: navigation and negotiation in times of biomedicalization

13. What constitutes an in/significant organ? The vicissitudes of juridical and medical decision-making regarding genital surgery for intersex and trans people in Sweden

16. Before the cut: rethinking genital identity

is a Researcher at Centre for Gender Research, Uppsala University, Sweden.