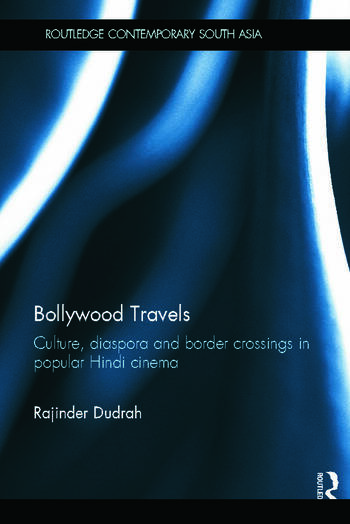 Using an interdisciplinary framework, this book offers a fresh perspective on the issues of diaspora culture and border crossings in the films, popular cultures, and media and entertainment industries from the popular Hindi cinema of India. It analyses and discusses a range of key contemporary films in detail, such as Veer Zaara, Jhoom Barabar Jhoom, and Dostana.

The book uses the notion of travel analytically in and through the cinema to comment on films that have dealt with Indo-Pak border crossings, representations of diaspora, and gender and sexuality in new ways. It engages with common sense assumptions about everyday South Asian and diasporic South Asian cultures and representations as expressed in Bollywood cinema in order to look at these issues further. Moving towards an innovative exploration beyond the films, this book charts the circuits and routes of Bollywood as South Asian club cultures in the diaspora, and Hindi cinema entertainment shows around the world, as well as its impact on social media websites. Bollywood Travels is an original and thought provoking contribution to studies on Asian Culture and Society, Sociology, World Cinema, and Film, Media and Cultural Studies.

Rajinder Dudrah is Senior Lecturer and Director of the Centre for Screen Studies at the University of Manchester, UK. He has researched and published a large number of books on film, media and cultural studies.

"This book is an excellent piece of work and a scholarly contribution to the emerging field of Sociology of Media and Communication. Anyone who is interested in the areas of sociology, diaspora, media and film studies will find it interesting and useful." - Dr. Sudhansubala Sahu, Christ University, Bangalore (2012).

"Rajinder Dudrah’s study stands out as an original work about the ways in which Bollywood, India’s pre-eminent film industry, crosses boundaries, produces inter-connected global Indian diasporic cultures, and functions as the productive signifier of Indian modernity. Using analytically the metaphors of movement, journeying and border crossings the book persuasively advances a new theoretical framework with which to study this cinema" - Professor Vijay Mishra (Murdoch University, Australia), author of Bollywood Cinema and The Literature of the Indian Diaspora, both published by Routledge.

"Bollywood Travels, consolidates Dudrah’s position as an informed chronicler and commentator on a great global entertainment industry. Taking cue from the shaping analytical metaphor of ‘travel’, the text embarks upon, and accomplishes a deeply insightful journey to essay a multivalent, multi-layered, in-depth analysis of  popular contemporary Indian cinema. In the process, Dudrah competently unravels and updates the complex dynamic that underlies the shifting, growing identity of Bollywood by placing it plumb in its aesthetic, ideological and socio- cultural matrix." - Dr Meenakshi Bharat, Reader in English, Sri Venkateswara College, University of Delhi, India.

"This book is lucidly written and is a highly engaging read about the circulations of Bollywood films, popular culture, and related media industries.  Nobody does an innovative thesis on Bollywood like the Dudrah can. He is the SRK (Shahrukh Khan) of academia on the subject." - Mr Ammo Talwar MBE, Director of Punch Records (Birmingham, UK)

"The refreshing way in which Dudrah sets about his task means that the various chapters in this study are jewels in and of themselves, full of intriguing analyses, making for a delightful and revitalised compendium of work on Bollywood. This exemplary study, which adds much to our understanding of contemporary Bollywood, represents an important contribution to Routledge’s contemporary South Asia series." - Susan Hayward, Emerita Professor of Cinema Studies, University of Exeter, UK; South Asian Popular Culture, October 10.3

"As you might guess from its title, Rajinder Dudrah’s Bollywood Travels takes us down new paths and opens up new directions! Growing out of his 2006 Sage book Bollywood: Sociology Goes to the Movies, this new monograph explores travel in two primary senses. First, Dudrah analyses how border crossing and transnational culture appear in Bollywood films, and in particular those set in the diaspora. Second, he considers how Bollywood travels as a culture, not only across borders, but also off the film screens and into urban culture as part of what he calls ‘haptic urban ethnoscapes’ (62). Both are good, but the second is particularly exciting as it points towards where the new expanded Cinema Studies we call Screen Studies might go. For this reason, Bollywood Travels deserves a wider readership than only those with a particular interest in Bollywood’s global dimensions." - Chris Berry, Film Studies, King’s College London; Volume 3, Number 2, October 2012 , pp. 231-244(14)Transnational Cinemas, 2013.

"It is in this universe, or should one say a kind of Bollywood multiverse, that Bollywood Travels: Culture, diaspora and border crossings in popular Hindi cinema shines brightly. This book is Rajinder Dudrah’s latest exploration of Bollywood through a James Clifford inspired metaphor of reading Bollywood through its global travels. I say latest, as Dudrah is no novice in the field of Bollywood research. This is his second monograph on the subject. Dudrah deftly deploys concepts, frameworks, and methods from the disciplines of Sociology, Film, Media and Cultural Studies, and South Asian Studies to produce the book’s interdisciplinary and complex arguments in a wonderfully readable style... Dudrah’s brilliant use of the theoretical framework of travel as a fruitful way of thinking through Bollywood’s global circulation, its assemblage, allows for attention to the contexts within which it engenders popular cultural forms. In this sense, Bollywood Travels is of major significance and will be of value for the research directions that the book helpfully maps in its concluding comments." - Goldie Osuri, Volume 11, Number 1; Borderlands e-journal 2013.

"Bollywood Travels is clearly not only a significant intervention in the field of Bollywood research and diaspora studies, but it also explains how to read Bollywood from a new perspective, and tackles crucial matters regarding gender and queer by connecting them to mainstream cinema... Bollywood Travels is lucidly written (with remarkable translations of Hindi dialogue), and brings forth a range of contemporary material as well as an interdisciplinary edge (by proposing innovative methods) which enrich the existing theoretical speculation vis-a-vis Hindi popular cinema." - Madhuja Mukherjee; South Asia: Journal of South Asian Studies, 36:1, 151-152 (2013).

"This book is a timely intervention in the global cinematic discourse, critically analyzing the sociocultural and audiovisual shifts that have been occurring in contemporary Hindi cinema and providing some insightful observations and ways forward for future scholarship in the discipline. The language is easy to follow, and I would recommend it to film scholars and those interested in South Asian cultural studies." - Rohit K. Dasgupta, University of the Arts London; The Journal of Popular Culture (Sage), 2013.