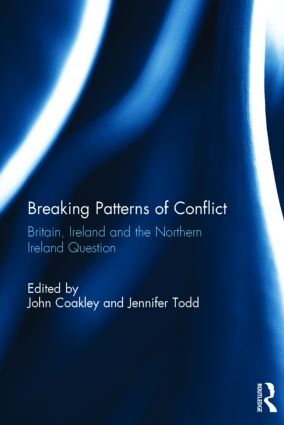 The role of external powers and international bodies in efforts to break patterns of conflict and to install stable and durable peace settlements is well known. This book focuses on an unusual case where the sovereign state and a neighbour state help broker an agreed settlement in a disputed and conflictual region. It analyses the roles of the British and Irish governments in pursuing political stability in Northern Ireland, a disputed region of the United Kingdom over which the Irish state has had a territorial claim.

The book focuses on the changes in the British state, whose writ extends over Northern Ireland, but also the Irish state, which surrendered a strong formal but ineffective claim to jurisdiction over Northern Ireland for the reality of a significant voice in its political future. These changes ultimately facilitated the process of settlement leading to the 1998 Good Friday Agreement, and the later transformation of institutions and political relations in Northern Ireland and between the UK and Ireland. It innovates by using a new oral archive of elite interviews built up over the past decade.

The authors of the various chapters address a range of dimensions in which these changes are reflected. These include new interpretations of the dynamics of the Northern Ireland conflict and in particular of the evolving British-Irish relationship, new perspectives on the positions of governments and parties, and new analyses of the contribution of cross-border contacts in two areas where consequences are likely to be indirect but profound: television broadcasting and business cooperation.

This book was published as a special issue of Irish Political Studies.

Jennifer Todd is Professor in the School of Politics and International Relations, University College Dublin. She has researched and published extensively (individually and jointly) on the Northern Ireland conflict and settlement process, and on ethnicity, identity and identity change in, inter alia, Political Studies, West European Politics, Nationalism and Ethnic Politics, Nations and Nationalism, Theory and Society. Her most recent book is the co-edited Ethnicity and Religion: Intersections and Comparisons (Routledge, 2011).