Bring the Funny
The Essential Companion for the Comedy Screenwriter 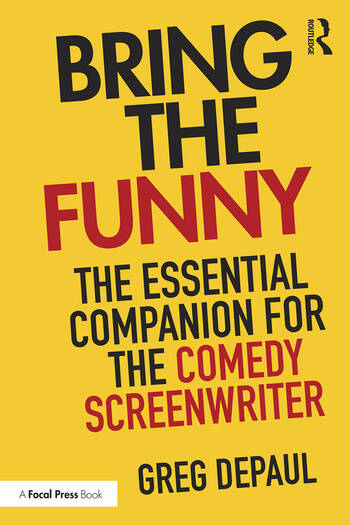 Bring the Funny: The Essential Companion for the Comedy Screenwriter

A sharp, funny book about comedy screenwriting from a successful screenwriter that uses recent – as in this century – movies you've actually seen as examples.

Now Greg takes everything he knows about writing comedy and breaking into the biz, tosses it into a blender and serves up this tasty, fat-free smoothie of a book that’s easy to read, brutally honest, and straight from the heart ... of Hollywood.

The BDR's The Two-Hander The Conceit Comedic Escalation

If you're looking to write funnier and better screenplays, you want this book. But if you're ready to pack up your car, drive out to L.A., and dive into a career as a comedy screenwriter, you need this book. Now.

Buy it, jam it into your pocket, and hit the gas. Greg's got your back.

a) What is the Funny? (An age-old question. Try my age-old answer.)

a) Prepare yourself (Sit down at your computer, roll up your sleeves and get ready not to write.)

b) Follow your heroes (The all-stars of comedy screenwriting) c) Mind your mentors (Well, me, for one)

d) Live the page (How to walk, talk, and blow your nose like a comedy screenwriter)

3. Get on Your Horse

a) What is a screenplay? (You think you know.)

g) The long haul of the feature screenwriter (Pack a lunch.)

a) Character (The undefinable element you must define)

b) Writing Inside-Out (starting with character)

d) Relate-ability ("Hey, that idiot onscreen is me!")

e) Your character stable (where live the confidante, the antagonist, the mentor ...)

a) Act 2 is all. (Everything else is small.)
b) High concept (This stuff comes from God. Or cocaine. Or both.)

e) Fish outta water (and flopping on the deck.)

f) Comic Justice (Healing the world one script at a time.)

g) The idea factory (Build it and they will come.)

6.  The String of Pearls

a) The DWR’s (Dramatic Writing Rules. Ignore them at your peril.)

b) The Conceit (You get one big gulp at the beginning.)

c) Escalation (A DWR that’s so important it needs its own section.)

f) Sub-plotting (and cut them into little pieces.)

g) Gapping (What not to write.)

c) Scenes a Faire (They’re obligatory for a reason.)

e) Subtext (Much discussed, much misunderstood)

f) Setpieces (Leave them in flames.)

a) The comedy-industrial complex (what’s being made now)

b) Agents (in Latin they are known as Tenpercenticus Exploiticus)

c) Managers (AKA agents who want to be producers)

d) Producers (What do they actually do?)

e) Everybody else (There is anybody else?)

a) Sacrifice (You wanna be famous? Get out a knife and lay your son on a rock.)

b) Collaboration (And you became a writer to get away from people!)

c) Other screenwriters (Yes, they exist.)

"If you’re serious not just about writing great comedy scripts, but also having a successful career as a comedy screenwriter, I highly recommend Bring the Funny. The book is full of practical advice for both successful writing habits and a realistic approach to breaking into this ultra-competitive industry." - Angela Bourassa, founder and Editor in Chief of LA Screenwriter.