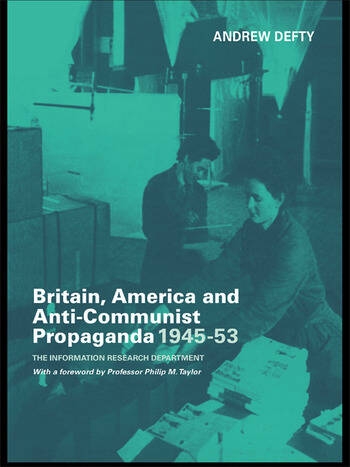 In the Cold War battle for hearts and minds Britain was the first country to formulate a coordinated global response to communist propaganda. In January 1948, the British government launched a new propaganda policy designed to 'oppose the inroads of communism' by taking the offensive against it.' A small section in the Foreign Office, the innocuously titled Information Research Department (IRD), was established to collate information on communist policy, tactics and propaganda, and coordinate the discreet dissemination of counter-propaganda to opinion formers at home and abroad.

Andrew Defty was awarded his Ph.D by the University of Salford in 2002. He is a graduate of Salford's MA in Inrelligence and International Relations, and has lectured on intelligence, US-UK relations and the Cold War. this is his first book. He has published articles in the journal Intelligence and National Security and is editor of the newsletter of the Security and Intelligence Studies Group (SISG).