Britain before the Reform Act
Politics and Society 1815-1832 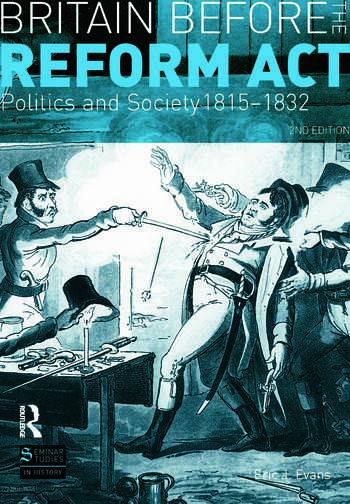 Britain before the Reform Act: Politics and Society 1815-1832

In the years1815-1832, Britain came close to revolution. Fewer than twenty years separate the Battle of Waterloo from the passing of the ‘Great’ Reform Act but during this period Britain’s political elite was challenged as never before. In rising to that challenge, the political elite attempted, with considerable success, to ensure that Britain engineered that most perilous of transitions, from a less complex and more deferential society into a modern urban and industrial one, while avoding political revolution.

In this extensively revised 2nd edition Evans engages with a welter of new material and fresh interpretations. The book sheds light both on the challenges to existing political and social authority and why those challenges were seen off.

·         The composition of Britain’s political elite and how this elite coped with the problems thrown up by a society urbanising and modernising at an unprecedented rate.

·         How Britain reacted to the longer-term implications of the French Revolution, including the development of a more cohesive national identity.

·         How the elite attempted to maintain public order in this period – and with what success.

·         The extent of change in Britain’s political system brought about by political, religious and administrative reforms

Written in accessible style, with a rich collection of documents, chronology, glossary, a guide to further reading,and a ‘Who’s Who’ which summarises the careers and contributions of the main figures, this new edition is essential for all those interested in understanding Britain at this most crucial turning point in its history.

Eric J Evans is Emeritus Professor of History at Lancaster University. He is the author of numerous titles of political and social history. His publications include Parliamentary Reform, 1770-1918 (1999) and The Forging of the Modern State: Early Industrial Britain, 1783-1870 (3rd edition,2001) and Thatcher and Thatcherism (Routledge, 3rd edition, 2013).