Britain since 1688
A Nation in the World 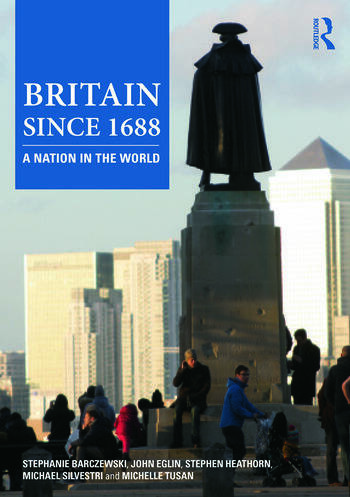 Britain since 1688: A Nation in the World

Authored by a team of North American university professors who specialize in the subject, Britain since 1688: A Nation in the World has been specifically written for students in the United States, or from other countries where pre-existing knowledge of the history of Britain cannot be taken for granted.

Beginning with the Glorious Revolution of 1688, the book progresses through the major events of the next three-and-a-half centuries, up to the coalition government of the present day. It uses a traditional chronological structure and provides a strong backbone of political history, but incorporates contemporary thematic concerns and the most recent scholarship throughout. The authors provide coverage of all parts of the British Isles individually as well as treating them as an integrated whole, and key aspects of British society are examined, including class, race, religion and gender – a focus that allows the complexities of British national identity and the historical unity and disunity of the British Isles to be assessed. Britain’s interaction with the world features prominently, including extensive coverage of the British Empire, both as a political, military and geographic entity and as a force of cultural influence on the British metropolis. The complexities of Britain’s relationship with the United States are explored in detail, ranging from the American Revolution in the eighteenth century to the "special relationship" established by the twentieth.

Featuring textboxes containing illustrative examples that support the main text, images intended to inspire discussion, and a comprehensive companion website with an interactive timeline that includes links to primary documents, images and video, this book provides everything needed to give students a comprehensive grounding in the rich tapestry of events, characters, and themes that encompass the history of Britain since 1688.