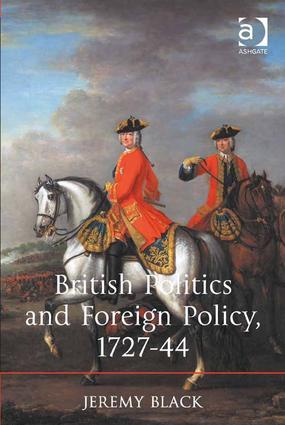 Covering the period from the end of the Anglo-French alliance in 1731 to the declaration of war between the two powers in 1744, this book charts a turbulent period in British politics that witnessed the last decade of the Walpole ministry, the attempt to replace it by a Patriot government, and the return of the Old Corps Whigs to a process of dominance. In particular it reveals how ministerial change and political fortunes were closely linked to foreign policy, with foreign policy both affecting, and being affected by, political developments. The book draws upon a great range of foreign and domestic sources, but makes particular use of foreign diplomatic records. These are important as many negotiations were handled, at least in part, through envoys in London. Moreover, these diplomats regularly spoke with George II and his ministers, and some were personal friends of envoys and could be used for secret negotiations outside normal channels. The range of sources consulted ensures that the book offers more than any previous book to cover the period as a whole, whilst not simply becoming a detailed study of a number of episodes. Instead it retains the strong structural aspects of the relationship between foreign policy and politics necessary to examine questions about political stability, motivation and effectiveness. Following on from Jeremy Black’s previous studies on eighteenth-century foreign policy, ’Politics and Foreign Policy under George I’ (covering the period 1714-27) this new book takes the story up to 1744 and continues to illuminate the complex and often opaque workings of the British state at a turbulent period of European history.

'[Contains] all the features that one would expect from a Black publication: detailed and extensive engagement with a wide variety of archival material and a desire to reconstruct the messiness and indeterminacy of the diplomatic process.' Diplomacy and Statecraft

Jeremy Black is Professor of History at the University of Exeter. He is the author of over 100 books, especially on eighteenth-century British politics and international relations, and is or has been on a number of editorial boards including the Journal of Military History, the journal of the Royal United Services Institute, Media History, the International History Review, and History Today, and was editor of Archives.