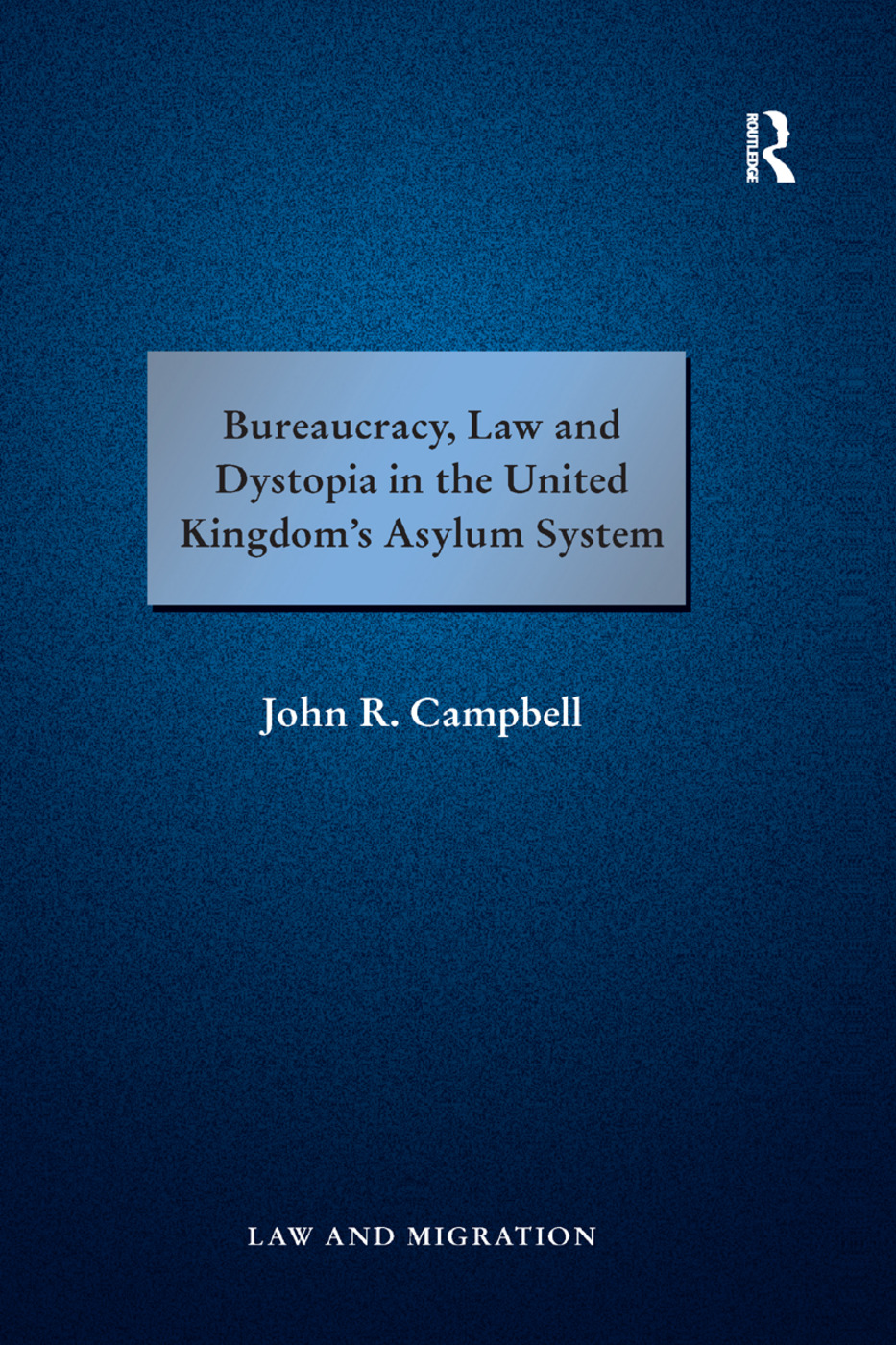 Bureaucracy, Law and Dystopia in the United Kingdom's Asylum System

The central concern of this book is to find answers to fundamental questions about the British asylum system and how it operates. Based on ethnographic research over a two-year period, the work follows and analyses numerous asylum appeals through the British courts. It draws on myriad interviews with individuals and a thorough examination of many state and non-state organizations to understand how the system works. While the organization of the book reflects the formal asylum process, a focus on specific legal appeals reveals the ‘political’ factors at play as different institutions and actors seek to influence judicial decision-making and overturn/uphold official asylum policy. The final chapter draws on the author’s ethnographic findings of the UK’s ‘asylum field’ to re-examine research on the Refugee Determination System in the US, Canada and Australia which has narrowly focused on judicial decision-making. It argues that analysis of Refugee Determination Systems must be situated and studied as part of a wider, political, semi-autonomous ‘asylum field’ which needs to be better understood.

Providing an in-depth ethnographic study of a national asylum system and of immigration law and practice, the book will be an invaluable resource for academics, researchers and policy-makers in the UK and beyond working in this highly topical area.

'Dr. Campbell’s important field study concerns the bureaucratic processing of asylum applications from Ethiopians and Eritreans seeking asylum in the UK. While this excellent work describes the pertinent formal law, its striking originality lies in its ethnographic perspective. This includes detailed case studies of the peculiar workings of an overloaded, under- prepared and understaffed government bureaucracy righteously turning down most such applications.'

'The processing of asylum claims largely takes place in conditions which exclude the voices of the people whose future is being decided. This important book offers rich anthropological insights into the operation of the refugee determination system and identifies the need for continued vigilance about failures to protect vulnerable individuals.'

'Dr. Campbell’s remarkable book provides deep insights into the UK asylum system and how it limits who is determined to be a refugee. Findings and conclusions are premised on extensive interviews and analysis of cases in the British asylum system. It will become a touchstone for future asylum system studies.'

Chapter 1. An anthropological approach to studying the asylum field

Chapter 2. The evolution of the British Asylum System

Chapter 3. The work of the British Home Office and UK Border Agency

Chapter 6. The politics of 'permission' and the Court of Appeal

Dr John R. Campbell is a Reader in the Anthropology of Africa and Law at the School of Oriental and African Studies, London. He has undertaken fieldwork in Ghana, Tanzania, Ethiopia and the UK, and has undertaken development-related consultancies in Kenya, Ethiopia and Botswana. In addition to teaching the anthropology of development and the ethnography of Eastern Africa, he teaches courses on legal anthropology. His most recent book is Nationalism, Law and Stateless: Grand Illusions in the Horn of Africa (Routledge, 2013).

Migration and its subsets of refugee and asylum policy are rising up the policy agenda at national and international level. Current controversies underline the need for rational and informed debate of this widely misrepresented and little understood area. Law and Migration contributes to this debate by establishing a monograph series to encourage discussion and help to inform policy in this area. The series provides a forum for leading new research principally from the Law and Legal Studies area but also from related social sciences. The series is broad in scope, covering a wide range of subjects and perspectives.