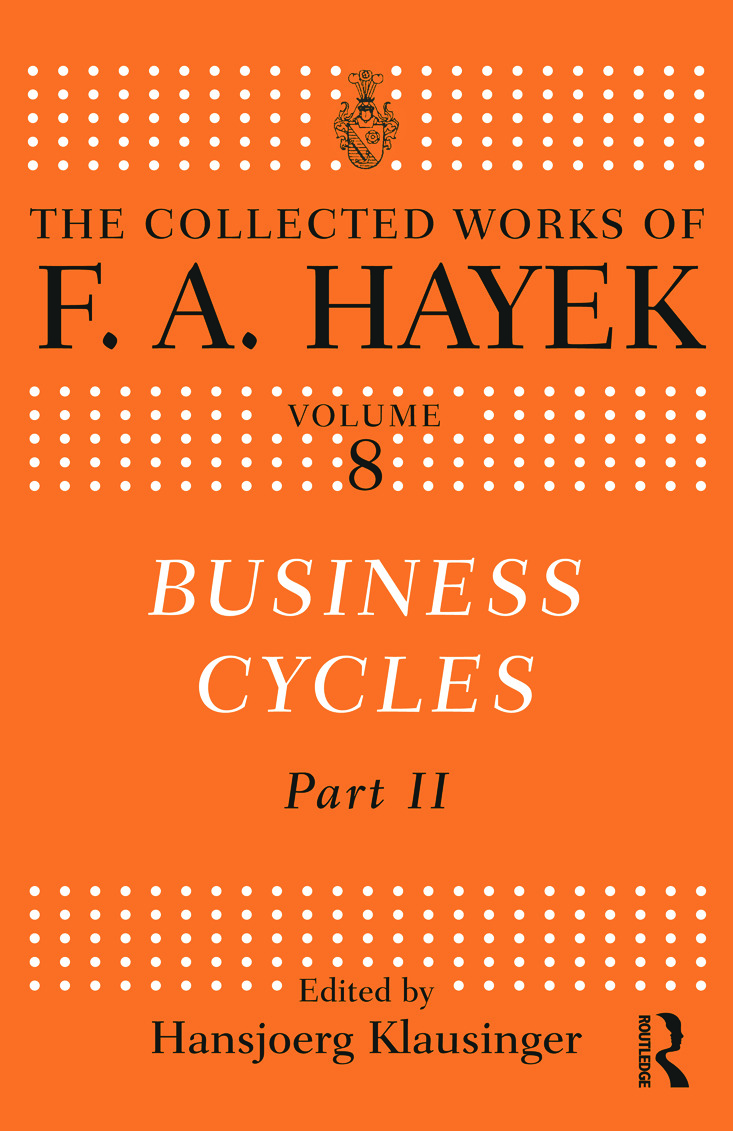 In the years following its publication, F. A. Hayek's pioneering work on business cycles was regarded as an important challenge to what was later known as Keynesian macroeconomics. Today, as debates rage on over the monetary origins of the current economic and financial crisis, economists are once again paying heed to Hayek's thoughts on the repercussions of excessive central bank interventions.

The latest editions in Routledge's ongoing series The Collected Works of F. A. Hayek, these volumes bring together Hayek's work on what causes periods of boom and bust in the economy. Moving away from the classical emphasis on equilibrium, Hayek demonstrates that business cycles are generated by the adaptation of the structure of production to changes in relative demand. Thus, when central banks artificially lower interest rates, the result is a misallocation of capital and the creation of asset bubbles and additional instability. Business Cycles: Part I contains Hayek's two major monographs on the topic: Monetary Theory and the Trade Cycle and Prices and Production. Reproducing the text of the original 1933 translation of the former, this edition also draws on the original German, as well as more recent translations. For Prices and Production, a variorum edition is presented, incorporating the 1931 first edition and its 1935 revision. Business Cycles: Part II assembles a series of Hayek's shorter papers on the topic, ranging from the 1920s to 1981.

In addition to bringing together Hayek's work on the evolution of business cycles, the two volumes of Business Cycles also include extensive introductions by Hansjoerg Klausinger, placing the writings in intellectual context, including their reception and the theoretical debates to which they contributed, and providing background on the evolution of Hayek's thought.

Editorial Foreword Introduction 1. Investigations into Monetary Theory. Appendix: The Exchange Value of Money; A Review 2. The Purchasing Power of the Consumer and the Depression 3. A Note on the Development of the Doctrine of 'Forced Saving' 4. The Present State and Immediate Prospects of the Study of Industrial Fluctuations 5. Restoring the Price-Level? Appendix: Excerpt from a Letter, F. A. Hayek to Gottfried Haberler, December 20, 1931 6. Capital and Industrial Fluctuations: A Reply to a Criticism 7. Investment that Raises the Demand for Capital 8. Profits, Interest and Investment 9. The Ricardo Effect 10. Professor Hayek and the Concertina-Effect, by Nicholas Kaldor. Postscript, by Nicholas Kaldor 11. Three Elucidations of the Ricardo Effect 12. The Flow of Goods and Services