Byzantium and the Other: Relations and Exchanges 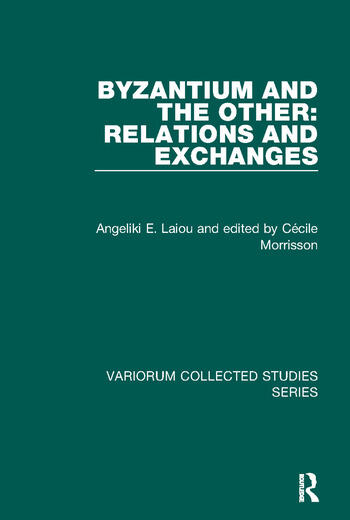 Byzantium and the Other: Relations and Exchanges

Angeliki Laiou (1941-2008), one of the leading Byzantinists of her generation, broke new ground in the study of the social and economic history of the Byzantine Empire. Byzantium and the Other: Relations and Exchanges, the second of three volumes to be published posthumously in the Variorum Collected Studies Series, brings together fourteen articles published between 1982 and 2012 that reflect her enduring interest in Byzantium's political, ideological, and commercial relations with its neighbours. The first three articles examine Byzantine attitudes and institutional responses to foreigners and strangers within the empire, while the next four concern Byzantium's response to the Crusades and, more generally, to questions of justice in the spheres of conflict and colonisation. The final seven articles investigate Byzantium's political and commercial relations with other regional and Mediterranean powers; particular emphasis is placed on Venice and Genoa, whose increasing involvement in the Byzantine economy so marked the final centuries of the empire's existence.

Contents: Preface, Cécile Morrisson and Rowan Dorin; Introduction, David Jacoby; Part I Byzantium and the Other: The foreigner and the stranger in 12th-century Byzantium: means of propitiation and acculturation; L'étranger de passage et l'étranger privilégié Ã  Byzance, XIe - XIIe siècles; Institutional mechanisms of integration. Part II Byzantium and the Crusades: Byzantium and the crusades in the 12th century: why was the 4th Crusade late in coming?; On just war in Byzantium; The just war of eastern Christians and the Holy War of the crusaders; The many faces of medieval colonization. Part III Long Distance Trade and Relations: Byzantine trade with Christians and Muslims and the crusades; Venice as a centre of trade and of artistic production in the 13th century; Italy and the Italians in the political geography of the Byzantines (14th century); Monopoly and privilege: the Byzantine reaction to the Genoese presence in the Black Sea; Monopoly and privileged free trade in the Eastern Mediterranean (8th-14th century); Regional networks in the Balkans in the middle and late Byzantine period; Byzantium and the neighboring powers: small-state policies and complexities; Index.

'As this collection of papers worthily represents, Angeliki Laiou’s scholarship deserves wide dissemination and readership for those interested in Byzantium, the Crusades, and Mediterranean economic history. Her insightful interaction with numerous sources both Byzantine and otherwise coupled with her originality of approach make for both interesting and essential reading. The editors, Cécile Morrison and Rowan Dorin, as well as Ashgate, deserve our gratitude for bringing these articles together and making them accessible.' Reviews in History