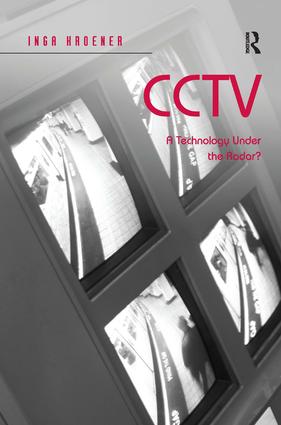 A Technology Under the Radar?, 1st Edition

Central state and non-covert surveillance began in earnest at the start of the twentieth century. By the start of the twenty-first century, the UK was one of the most surveilled societies on earth. This groundbreaking volume by Inga Kroener analyses the particular combination of factors that have created this surveillance state. Kroener argues against the inevitability of the rise of CCTV that is so often found in this literature, to map out the early history of CCTV, tracing its development from a tool for education, safety and transport during the 1950s, to one of politics in the 1970s and 1980s, to eventually become a tool of surveillance during the 1990s. Within this analysis, the complex role of the public in 'allowing' the widespread and rapid dissemination of CCTV is discussed and the representation of CCTV in the media is also studied. This volume will be of interest to all scholars working in the fields of surveillance studies; science, technology and society departments; and social historians more generally.

’Kroener has used the insights of science and technology studies, and of surveillance studies, to produce the most comprehensive history yet of British CCTV. Her in-depth historical research is grounded in a thorough knowledge of the secondary literature, and reveals for the first time the role of the 1984-85 Miners’ Strike in pioneering blanket public CCTV surveillance in residential areas.’ Chris A. Williams, Open University, UK ’Inga Kroener is a rising star in the burgeoning new field of surveillance studies. Her erudite new work on CCTV, captures why these technologies have slipped under the critical radar to become an ubiquitous part of modern street furniture. A comprehensive history of city wide surveillance systems coupled with a clear and fearless analysis of the relentless proliferation of surveillance capacity, make this an indispensable text for critical undergraduate criminology students.’ Steve Wright, Leeds Metropolitan University, UK