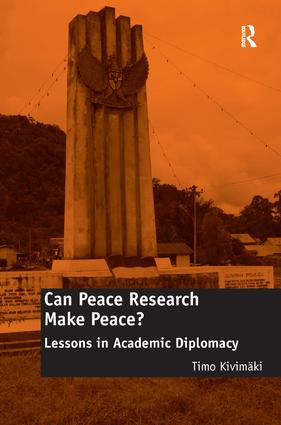 This book is about the process and, more generally, about the opportunities that peace research and the teaching of conflict resolution can offer academic diplomacy. As such the book is both an empirical and a theoretical project. While it aims at being the most comprehensive analysis of the conflict in West Kalimantan, it also launches a new theoretical approach, neo-pragmatism, and offers lessons for the prevention of conflicts elsewhere. While being based on the classical pragmatist theories of truth and explanation, the approach developed in this book incorporates the complications to social science theory caused by the 'discovery' of socially constructed realities, and concepts such as speech acts. Yet, instead of just theorizing speech acts and social constructs, the theoretical mission is to offer pragmatic, detailed, concrete prescriptions of what to do to deconstruct realities that threaten peace by the means available for research and scholars of peace.

Nominated for the 2014 Conflict Research Society Book of the Year Award. ’Prof. KivimÃ¤ki’s book is a fascinating analysis of the sources of and remedies to the conflict in Indonesia’s West Kalimantan. It is interesting not only for Indonesia-specialists, but also to peace researchers and peace activists. As a crucial peace practitioner in West Kalimantan, and a theorist, Prof. KivimÃ¤ki reveals the role of peace researchers as part of a team in a collaborative venture: officials and peace researchers can work together for peace. What both his practice and his analysis has pointed out is that peace research really does have an important role to play in the settlement of conflicts.’ H. Djohermansyah Djohan, Director General of Regional Autonomy, Ministry of Internal Affairs, The Republic of Indonesia

Timo KivimÃ¤ki is Professor of international relations with particular expertise in peace and conflict studies at the University of Bath. Previously he has held professorships at the University of Helsinki, University of Lapland, and at the University of Copenhagen. Professor KivimÃ¤ki has also been director of the Nordic Institute of Asian Studies (Copenhagen) and the Institute of Development Studies of the University of Helsinki. In addition to purely academic work Professor KivimÃ¤ki has been a frequent consultant to the Finnish, Danish, Dutch, Russian, Malaysian, Indonesian and Swedish governments, as well as to several UN and EU organizations on conflict and terrorism. He was President Martti Ahtisaari’s (mediators) adviser in the Aceh peace talks, and the initiator of the West Kalimantan peace process, led by Indonesia’s Vice President, Jusuf Kalla. Dr KivimÃ¤ki’s latest book, The Long Peace of East Asia was published by Ashgate in 2014.