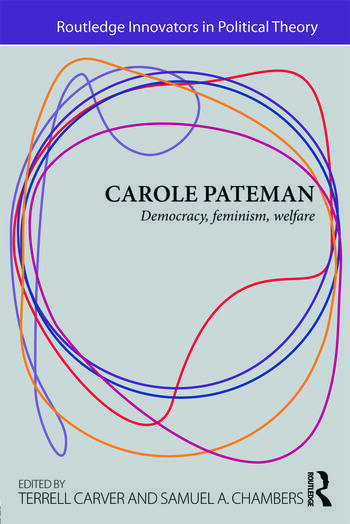 Carole Pateman’s writings have been innovatory precisely for their qualities of engagement, pursued at the height of intellectual rigour. This book draws from her vast output of articles, chapters, books and speeches to provide a thematic yet integrated account of her innovations in political theory and contributions to the politics of policy-making. The editors have focused on work in three key areas:

Pateman’s perspective is rooted in a practical perspective, enquiring into and speculating about forms of participation over and above the ‘traditional’ exclusions through which representative systems have been variously constructed over time. Her work pushes hard on theorists and politicians who make easy assumptions about apathy and public opinion, who bracket off the workplace and the home, and who see politics only in partisan activity, voter behaviour and governmental policy.

Pateman’s innovatory and still-cited work on participation antedates the feminist revolution in political theory and many of the practical struggles that developed through the later 1970s. While woman-centred, her concerns were always worked through larger conceptions of social class, economic advantage, power differentials, ‘liberal’ individualism and contracts including marriage. Her feminism was innovative in political theory, and within feminism itself. As a feminist Pateman defies categorization, and her concepts of ‘the sexual contract’ and ‘Wollstonecraft’s dilemma’ are canonical.

Pateman’s innovation here is an integration of welfare issues – in particular the proposals for a ‘basic income’ or for a ‘capital stake’ – into her broad but always rigorous conception of democracy. This is argued through in terms of citizenship, taken as the result of a social contract. In that way Pateman puts liberalism itself through an imminent critique, drawing in the practicalities and risks of life in late capitalist societies. Her theory as always is political, taking in neo-liberal attacks on ‘welfare states’ and the stark realities of international inequalities. Pateman’s career achievements in democratic and feminist theory are brought productively to bear on debates that would otherwise occur in more limited, and less provocative, academic and political contexts.

Terrell Carver is Professor of Political Theory at the University of Bristol, UK. He has published extensively on theoretical and substantive issues relevant to Marx, Engels and Marxism, and to sex, gender and sexuality.

Samuel A. Chambers is Associate Professor at The Johns Hopkins University, Baltimore, MD, USA. He writes broadly in contemporary thought, including work on language and media, popular culture and the politics of gender and sexuality.