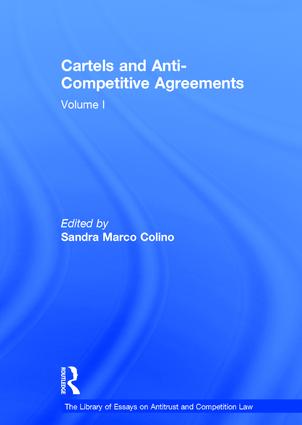 Antitrust is fast becoming a ’trending topic’, with over 120 countries having already adopted some form of competition legislation. This volume brings together carefully selected articles which reflect the evolution and progression of the regulation of joint conduct under competition law on both sides of the Atlantic, and which discuss principles of fundamental importance for antitrust law. The articles focus on various kinds of joint conduct between companies which might bear negative effects on competition, in particular on horizontal cartels and collusion between competitors. Attention is also paid to the debate surrounding the most adequate approach for vertical agreements, which take place between firms operating at different levels of production. Their effects on competition have traditionally been one of the most disputed issues in modern antitrust, and tend to divide the principal schools of thought that have influenced the evolution of competition policy around the world. The articles look primarily at two of the most established antitrust jurisdictions, namely the United States and the European Union. They discuss the general theoretical framework that has influenced the evolution of the law and policy; cover the most relevant practical developments; provide contrasting doctrinal views and pay particular attention to the main schools of thought that have influenced antitrust in the US and the EU; and are representative of the leading discussions in the course of antitrust history.

The Library of Essays on Antitrust and Competition Law

The Library of Essays on Antitrust and Competition Law