Causes and Consequences of Democratization
The regions of Russia 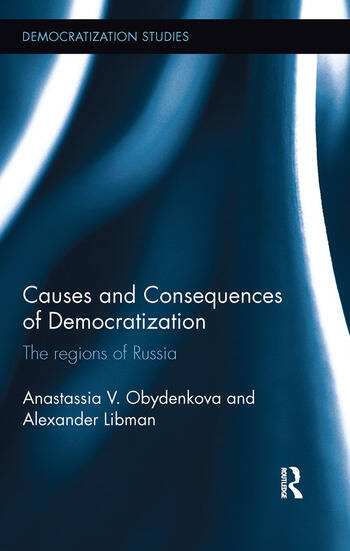 Causes and Consequences of Democratization: The regions of Russia

In recent decades, the regions of Russia have taken different paths of regime transition. Despite the consolidation of an autocratic regime at national level and the centralization steered by Vladimir Putin’s government, the variation across sub-national regimes persists.

Using an innovative theoretical framework, this book explores both causes and consequences of democratization in the regions of Russia. It is the first study in the field to systematically integrate structural and agency approaches in order to account for economic, social, historical and international causes of democratization and to trace its consequences. By focusing on the challenging and under-studied topic of sub-national regimes, the book provides a unique perspective on regime transition and the new theoretical framework contributes to a better understanding of democratization world-wide.

The book will be of key interest to scholars and students of democratization, sub-national regimes, East European politics, comparative politics, post-communism, and international relations.

Anastassia V. Obydenkova is a Senior Researcher at the Universitat Pompeu Fabra, Barcelona, Spain and a Research Fellow at the Centre for International Studies of London School of Economics, UK.

"Russia may be a riddle, wrapped in a mystery inside an enigma," but this book does more to unravel its post-Communist experience than any other I can think of. One of its most original aspects is a large-N analysis of sub-national variation in democracy and autocracy, drawing on an extensive databank. No study of democratization – east or west – has done this so thoroughly. Another finding of potentially wider significance is their demonstration that the size and loyalty of the local bureaucracy inherited from the ancient regime is a major contributor to a more autocratic outcome. Highly recommended to those condemned to making sense of post-Communist Russia, but also of interest to students of democratization elsewhere.

In their book, Obydenkova and Libman provide the most comprehensive and up to date account of Russia’s sub-national politics. Using a variety of historical and contemporary datasets and rigorous statistical analysis, they offer a nuanced and well-grounded explanation of the causes and effects of the diversity of political regimes within the country. A must read for scholars of Russian and comparative politics.

One of the landmarks in comparative democratisation studies in the last decade has been the development of studies of sub-national regime variation and dynamics. This book takes this approach to a new level of sophistication in a study of regional democratisation in Putin’s Russia. It thereby offers several novel insights into one of the most conspicuous and threatening autocracies in the world today.

Libman and Obydenkova have written an impressive book that takes full advantage of Russia’s regional diversity to test long-standing arguments about the sources of democracy and the economic impacts of political regimes.  Rich in empirical detail and far ranging in its analysis, this work offers fresh insights into the relationship between economic performance and democracy.  It deserves a wide audience in comparative political economy and Russian studies.