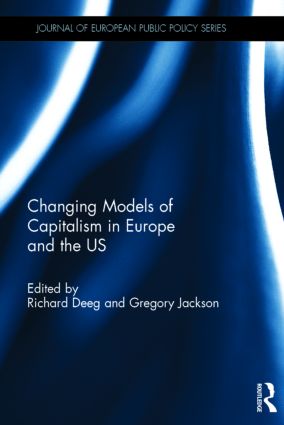 Changing Models of Capitalism in Europe and the U.S.

The volume analyzes the long-term trajectories of change in the capitalist models of the UK, Germany, Sweden, France, Italy, Hungary, Slovakia, and the United States. The case studies identify critical junctures and key periods of change in order to show how institutions are shaped by different sets of socio-political compromises and public policy. The case studies follow a common methodology, comparing change and linkages across six core institutional domains, thus facilitating a comparative understanding of the patterns and drivers of institutional change, as well as how liberalisation impacts countries in similar and dissimilar ways. The historical perspective of the cases highlights the transformative effects of relatively slow and incremental changes. These case studies also make an innovative contribution to examining the linkages between four levels of institutions that regulate the economy – the international, macro (national), meso, and micro. The volume reveals both a common trend toward more liberal forms of capitalism but also variations on this overarching trajectory. Markets themselves create their own dynamics, which have varied effects on firms and other economic actors in historically diverse institutional contexts.

This book was originally published as a special issue of the Journal of European Public Policy.

1. The long-term trajectories of institutional change in European capitalism Gregory Jackson and Richard Deeg 2. Like a phoenix from the ashes? Reassessing the transformation of the Swedish political economy since the 1970s Gerhard Schnyder 3. The trajectory of institutional change in Germany, 1979–2009 Gregory Jackson and Arndt Sorge 4. Changing French capitalism: political and systemic crises in France Bruno Amable, Elvire Guillaud and Stefano Palombarini 5. From the Southern-European model to nowhere: the evolution of Italian capitalism, 1976–2011 Marco Rangone and Stefano Solari 6. The role of state in development of socio-economic models in Hungary and Slovakia: the case of industrial policy Anil Duman and Lucia Kureková 7. Strategic transformation and muddling through: industrial relations and industrial training in the UK Howard Gospel and Tony Edwards 8. The limits of Liberalization? American capitalism at the crossroads Richard Deeg

Richard Deeg is Professor and Head of the Department of Political Science at Temple University, USA. He received his PhD from the Massachusetts Institute of Technology, USA. His publications include Finance Capitalism Unveiled: Banks and the German Political Economy (1999) and numerous articles on German and European political economy in various journals, including Comparative Political Studies, Economy & Society, Governance, Journal of European Public Policy, Journal of International Business Studies, Publius: The Journal of Federalism, Small Business Economics, Socio-Economic Review, West European Politics, and World Politics. His current research focuses on causes and mechanisms of institutional change in financial systems.

is Professor of Management at the Free University Berlin, Germany. He received his PhD in Sociology from Columbia University, USA, and has worked extensively on the comparative institutional analysis of corporate governance. His publications include Corporate Governance in Japan: Institutional Change and Organizational Diversity (edited with Masahiko Aoki and Hideaki Miyajima, 2007), as well as numerous journal articles spanning the fields of sociology, political science and business studies. He is currently Chief Editor of the Socio-Economic Review.