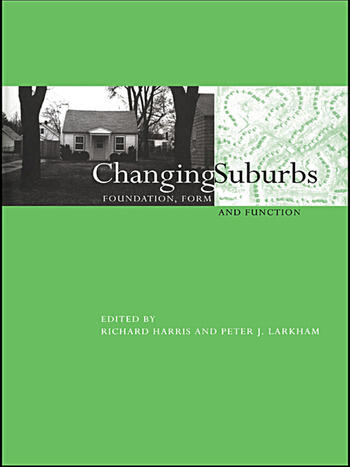 The editors and contributors to this volume demonstrate how suburbs and the meaning of suburbanism change both with time and geographical location.
Here the disciplines of history, geography and sociology, together with subdisciplines as diverse as gender studies, art history and urban morphology, are brought together to reveal the nature of suburbia from the nineteenth century to the present day.

'Many of the essays break new ground.' - The Architects Journal

'There is a clear message for urban designers...that the same concerns about urban change and the evolution of character need to be brought to questions of planning and urban design in suburban areas as they are in more easily acknowledged "good places".' - Urban Design, April 2000.

'..at the forefront of the contemporary suburban scholarship.' 'an impressive book that clearly conveys the diversity of suburban experiences over space and time' 'an enjoyable read...well laid out and clearly written.' - Environment and Planning, Vol27, June 2000.

'The book is a welcome contribution to the historiography of the suburbs, as each chapter is strong and well-written.' - Planning Perspectives