Charity and Mutual Aid in Europe and North America since 1800 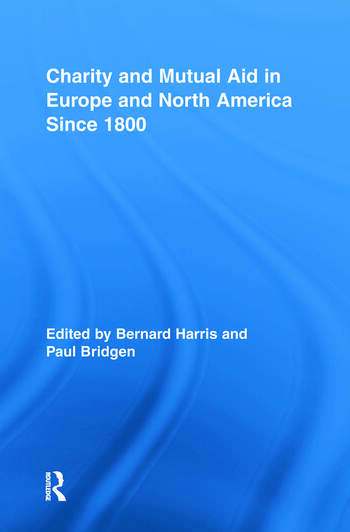 Charity and Mutual Aid in Europe and North America since 1800

International in perspective, the essays in this volume are primarily concerned with two facets of the mixed economy of welfare--charity and mutual aid. Emphasizing the close relationship between these two elements and the often blurred boundaries between each of them and commercial provision, contributors raise crucial questions about the relationship between rights and responsibilities within the mixed economy of welfare and the ties which bind both the donors and recipients of charity and the members of voluntary organisations. The volume critically assesses the relationships between the statutory and voluntary sectors in a variety of national settings, including Britain, the United States, the Netherlands, Sweden, Norway, Canada, and Germany during the last two hundred and fifty years, making the book as topical as it is significant.

1. Introduction: the ‘mixed economy of welfare’ and the historiography of welfare provision, Bernard Harris and Paul Bridgen  2. Charity and poor relief in England and Wales, circa 1750-1914, Bernard Harris  3. The mixed moral economy of welfare: European perspectives, Thomas Adams  4. Supporting self-help: charity, mutuality and reciprocity in nineteenth-century Britain, Daniel Weinbren  5. Historical welfare economics from the old regime to the welfare state. Mutual aid and private insurance for burial, sickness, old age, widowhood and unemployment in the Netherlands during the nineteenth century, Marco van Leeuwen  6. Welfare state formation in Scandinavia: the political significance of third-sector organisations for the emergence of sickness-insurance programmes in Norway and Sweden, Peter Johansson  7. Housing charities and the provision of social housing in Germany and the United States of America, Great Britain and Canada in the nineteenth century, Thomas Adam  8. ‘New alignments’: American voluntarism and the expansion of welfare in the 1920s, Andrew Morris  9. Voluntary failure, the middle classes and the nationalisation of the British voluntary hospitals, 1900-1946, Paul Bridgen.  Contributors.  Index

Bernard Harris is Professor of the History of Social Policy at the University of Southampton (UK). He has published a wide range of articles on different aspects of the social history of health and welfare and is the author of The origins of the British welfare state: social welfare in England and Wales 1800-1945 (Basingstoke: Palgrave, 2004).

Paul Bridgen is Senior Lecturer in Social Policy at the University of Southampton. He has published a range of articles on different aspects of twentieth-century British public policy and is the coeditor (with Traute Meyer and Barbara RiedemÃ¼ller) of Private pensions versus social inclusion? Non-state provision for citizens at risk in Europe (Cheltenham, Edward Elgar, 2007).