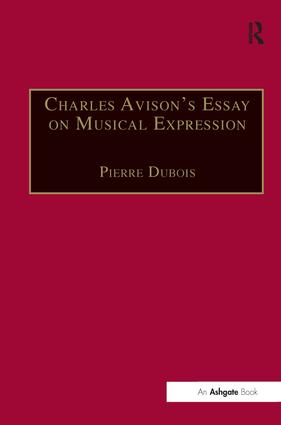 Charles Avison's Essay on Musical Expression, first published in 1752, is a major contribution to the debate on musical aesthetics which developed in the course of the 18th century. Considered by Charles Burney as the first essay devoted to 'musical criticism' proper, it established the primary importance of 'expression' and reconsidered the relative importance of harmony and melody. Immediately after its publication it was followed by William Hayes's Remarks (1753), to which Avison himself retorted in his Reply. Taken together these three texts offer a fascinating insight into the debate that raged in the 18th century between the promoters of the so-called 'ancient music' (such as Hayes) and the more 'modern' musicians. Beyond matters of taste, what was at stake in Avison's theoretical contribution was the assertion that the individual's response to music ultimately mattered more than the dry rules established by professional musicians. Avison also wrote several prefaces to the published editions of his own musical compositions. This volume reprints these prefaces and advertisements together with his Essay to provide an interesting view of eighteenth-century conceptions of composition and performance, and a complete survey of Avison's theory of music.

'Avison comes over very well here… He doesn't fit neatly into the pattern of conservative or progressive, unlike his critic William Hayes, Oxford's Professor of Music and a man of more limited musical sympathies. Pierre Dubois deftly sets both in the intellectual climate of the time… Avison may have some quirky ideas, but he presents them extremely clearly (far more so than the Professor) and offers insights into how one composer understood his art.' Early Music Review 'Pierre Dubois' new edition is to be warmly welcomed and especially because, conveniently, it also contains transcripts of William Hayes' critical response to the original edition, and Avison's own retorts to them… Dubois' own introduction is apt and pertinent, and the accompanying endnote textual commentary is also capable and appropriate… the ready availability of this edition, and its associated documentation, will be of immense significance to readers who wish to acquaint themselves with the perceptive and firmly held views of an articulate and distinguished 18th-century English composer and theorist.' The Consort 'We should […] be grateful to Pierre Dubois for assembling and editing these texts and for sharing his view of Avison's place in the eighteenth-century discourse on aesthetics.' Music and Letters