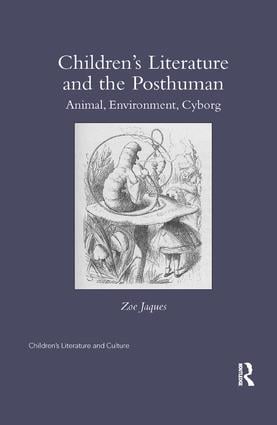 Children's Literature and the Posthuman

An investigation of identity formation in children's literature, this book brings together children’s literature and recent critical concerns with posthuman identity to argue that children’s fiction offers sophisticated interventions into debates about what it means to be human, and in particular about humanity’s relationship to animals and the natural world. In complicating questions of human identity, ecology, gender, and technology, Jaques engages with a multifaceted posthumanism to understand how philosophy can emerge from children's fantasy, disclosing how such fantasy can build upon earlier traditions to represent complex issues of humanness to younger audiences. Interrogating the place of the human through the non-human (whether animal or mechanical) leads this book to have interpretations that radically depart from the critical tradition, which, in its concerns with the socialization and representation of the child, has ignored larger epistemologies of humanness. The book considers canonical texts of children's literature alongside recent bestsellers and films, locating texts such as Gulliver’s Travels (1726), Pinocchio (1883) and the Alice books (1865, 1871) as important works in the evolution of posthuman ideas. This study provides radical new readings of children’s literature and demonstrates that the genre offers sophisticated interventions into the nature, boundaries and dominion of humanity.

"Jaques uncovers the posthuman nature of characters and types that we recognize from children’s literature: talking animals and plants, and the uncanny half-life of toys and robots are discussed through the lens of philosophers like Donna Haraway and Jacques Derrida… Jaques’s study successfully makes some interesting connections and convincingly argues for children’s literature, a place where non-traditional subjectivities are often explored, as an exciting arena for posthumanist studies."

"Children’s Literature and the Posthuman is an expansive, intelligent and frequently quite delightful trek through the history of children’s literature in order to uncover the myriad ways in which children’s books have imaginatively sought to engage with philosophical debates about what it means to be human. Unlike other critical applications of posthumanism to children’s literature, which have tended to concentrate on the impact of technology on human subjectivity and have thus focused primarily on the genre of science-fiction (a category into which my own recently published monograph, Technology and Identity in Young Adult Fiction: The Posthuman Subject, which was published in 2014, falls), Jaques’ monograph offers its readers a much broader and more exploratory argument about the origins of posthumanism in children’s books and films."

Introduction: The Child, the Book and the Posthuman Ethic Part I: Animal 1. Creature 2. Pet Part II: Environment 3. Tree 4. Water Part III: Cyborg 5. Robot 6. Toy Conclusion: A Question: Who are you?

Zoe Jaques is Lecturer in Children’s Literature and Education at Cambridge University and a Fellow of Homerton College. She is co-author of Lewis Carroll’s Alice’s Adventures in Wonderland and Through the Looking-glass: A Publishing History (2013).