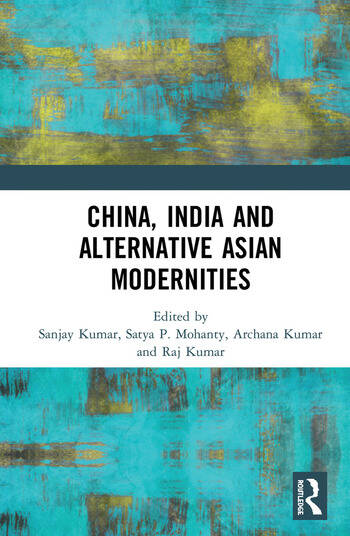 The conception of modernity as a radical rupture from the past runs parallel to the conception of Europe as the primary locus of global history. The essays in this volume contest the temporal and spatial divisions—between past and present, modernity and tradition, and Europe’s progress and Asia’s stasis—which the conventional narrative of modernity creates. Drawing on early modern Chinese and Indian history and culture instead, the authors of the book explore the provenance of modernity beyond the west to see it in a transcultural and pluralistic light.

The central argument of this volume is that modernity does not have a singular core or essence—a causal centre. Its key features need to be disaggregated and new configurations and combinations imagined. By studying the Bhakti movement, Confucian democracy, and the maritime and agrarian economies of China and India, this book enlarges the terms of debate and revisits devalued terms and concepts like tradition, religion, authority, and rural as resources for modernity.

This book will be of great interest to researchers and academicians working in the areas of history, Sociology, Cultural Studies, literature, geopolitics, South Asian and East Asian Studies.

Sanjay Kumar is Professor of English at Banaras Hindu University. He is engaged in a comparative study of South Asian vernacular and folk literary and cultural traditions as sites of articulation of alternative modernities.

is Professor of English at Cornell University. He has written and edited books on literary theory, minority studies, and colonial and postcolonial studies.

is Professor of English at Banaras Hindu University. She is currently engaged in research on women folk culture and has done extensive fieldwork in Banaras region to collect women folksongs.

is Professor of Hindi at Banaras Hindu University. He has extensively published research articles in reputed Hindi Journals and he is currently involved in a comprehensive project of retrieving, editing and interpreting rare vernacular texts and manuscripts of the early modern period.

‘This rich collection of essays pluralizes our understandings of modernity by offering new conceptual frameworks and empirically grounded analyses of alternative modernities.  The contributions, all by well-known scholars, show how differently the world was experienced and constructed across time and space in Asia.’

‘This is an excellent collection of essays on India, China, and beyond by some of the outstanding scholars in the field. The book offers insights into a wide range of topics, from issues of modernity to circulatory history. It also presents innovative methodologies to study and understand Asia through comparative and connected frameworks. The book will appeal not only to historians and anthropologists, but also to those interested in the religious, philosophical as well as the political traditions of Asia.’

—Tansen Sen, Director of the Center for Global Asia and Professor of History at NYU Shanghai and Global Network Professor at NYU, author of Buddhism, Diplomacy, and Trade: The Realignment of India-China Relations, 600–1400 (U of Hawai’i Press, 2003); India, China, and the World: A Connected History (Rowman & Littlefield, 2017)

‘From ‘connected’ to ‘circulatory’ and ‘competitive’ histories, this volume brings together a stellar cast of scholars, from across a range of disciplines, to provide alternative and vernacular accounts of modernity in China, India and Southeast Asia. It provides a platform for conversations between ‘alternative’ modernities as south‐south dialogues, making it unnecessary for these conversations to be always mediated through the West. It is a timely venture and an ever more important one.’

‘It is now abundantly clear that some of the deepest problems engendered by capitalist modernity cannot be solved only by the social, political and ethical categories associated with the modern west. Yet, while much scholary energy and effort have been expended on a small but dominant number of western traditions, little systematic research has been done to excavate the conceptual treasures of other non-western forms of life. Only when the resources of the critical traditions of India, Africa, China, Persia, Arab, and the Latin American subcontinent are imaginatively unearthed will we make headway towards addressing the pressing issues of our times and transform the social and political imaginaries of our crisis-ridden societies. This illumnating collection of essays on Indian and Chinese modernity will make an invaluable contribution towards that endeavor and is bound to become an indispensable guide to alternative modernities.’