China and Orientalism
Western Knowledge Production and the PRC 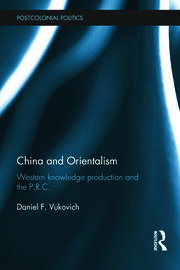 China and Orientalism: Western Knowledge Production and the PRC

This book argues that there is a new, Sinological form of orientalism at work in the world. It has shifted from a logic of ‘essential difference’ to one of ‘sameness’ or general equivalence. "China" is now in a halting but inevitable process of becoming-the-same as the USA and the West. Orientalism is now closer to the cultural logic of capitalism, even as it shows the afterlives of colonial discourse. This shift reflects our era of increasing globalization; the migration of orientalism to area studies and the pax Americana; the liberal triumph at the "end" of history and the demonization of Maoism; an ever closer Sino-West relationship; and the overlapping of anti-communist and colonial discourses.

To make the case for this re-constitution of orientalism, this work offers an inter-disciplinary analysis of the China field broadly defined. Vukovich takes on specialist work on the politics, governance, and history of the Mao and reform eras, from the Great Leap Forward to Tiananmen, 1989; the Western study of Chinese film; recent work in critical theory which turns on ‘the China-reference"; and other global texts about or from China. Through extensive analysis, the production of Sinological knowledge is shown to be of a piece with Western global intellectual political culture.

This work will be of great interest to scholars of Asian, postcolonial and cultural studies.

1. Sinological-Orientalism Now: ‘China’ and the New Era  2. Uncivil Society, or, Orientalism and Tiananmen, 1989  3. Maoist Discourse and Its Demonization 4. Accounting for the Great Leap Forward: Missing Millions, Excess Deaths, And A Crisis of Chinese Proportions  5.DeLillo, Warhol, and the Specter of Mao: The ‘Sinologization’ of Global Thought   6. Screening Sinology: On the Western Study of Chinese Film.  7.The China-Reference And Orientalism in the Global Economy

'It is a pointed and spirited book that incorporates a remarkably transdisciplinary range of approaches and texts.'

'A book of startling honesty and conviction. Writing from Hong Kong but not as a Sinologist, Vukovich presents an erudite case for re-thinking the lessons of Tiananmen, reassessing the legacy of Mao, and questioning the idea that China needs to be saved by becoming like "us." As a revisionist reading of post-war China, the book brims with antinomian vignettes on everything from Chinese cinema to the novels of De Lillo and the philosophy of Arendt.Vukovich blasts the new Orientalism that seeks to free China from its supposedly Borg-like past. A rare voice, and a welcome one.'

'This is a unique critique of orientalism in contemporary Chinese studies. Daniel Vukovich argues that there is a new form of orientalism, which does not project China as an ‘'other'’ as many traditional Sinologists did, but emphasizes ‘'sameness'’ or general equivalence of China to the US-West. From this basic observation, the author highlights the cultural logic of capitalism in the new Orientalistic interpretation of China. A sharp, inspiring and timely book!'

‘Vukovich's tenacious critique of the China Studies field is by itself worth the price of admission. But the bonus for readers is his remarkable history of the complexities of post-liberation China. As timely as could be, and guaranteed to spark debate.’

‘An important intervention into the battle for China's past and present . At its heart is a wide ranging, strong critique of the bulk of China studies scholarship on the P.R.C since the 1980s. But it also draws extensively on revisionist, new leftist, and other Chinese scholarship to argue for what is being erased by Sinological-orientalism." Its framing of this knowledge as orientalist and 'post-colonial' should cause a sensation. It may even finally trigger a sorely needed debate in the field.’

'This slim, sharply-argued volume should be a mandatory reading for all of us who work on post-1949 China. China and Orientalism is a refreshing and often eye-opening analysis on how knowledge of the object called "China" has been constructed in the West since the end of Maoism...China and Orientalism is an essential contribution to our self-awareness as producers of knowledge and offers a welcome and indispensable criticism of the field.'