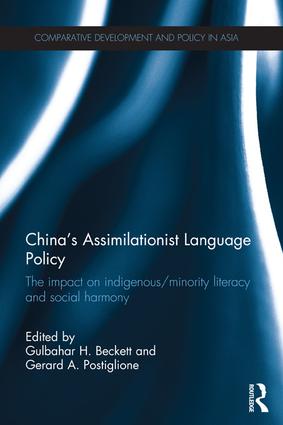 The Impact on Indigenous/Minority Literacy and Social Harmony, 1st Edition

China has huge ethnic minorities – over 40 different groups with a total population of over 100 million. Over time China’s policies towards minority languages have varied, changing from policies which have accommodated minority languages to policies which have encouraged integration. At present integrationist policies predominate, notably in the education system, where instruction in minority languages is being edged out in favour of instruction in Mandarin Chinese. This book assesses the current state of indigenous and minority language policy in China. It considers especially language policy in the education system, including in higher education, and provides detailed case studies of how particular ethnic minorities are being affected by the integrationist, or assimilationist, approach.

landscape in China and how these changes affect stability, especially in regard to education and social harmony among the minority population. The book leaves the reader with a clear conclusion that the Chinese government’s language policies work out differently in practice for different minorities and that education for minorities is a major key to achieving and maintaining social harmony… It is highly recommended to everyone interested in language and language education policies in China and to those interested in minority issues in China." - Heidi Cobbey, SIL International, East Asia Group; China Information 2012 26: 383

Gulbahar H. Beckett is Associate Professor of Sociolinguistics at the University of Cincinnati, USA. Gerard A. Postiglione is Professor and Head, Division of Policy, Administration and Social Sciences, and Director of the Wah Ching Center of Research on Education in China of the University of Hong Kong.

The primary aim of this series is to publish original, high quality, research level work, by both new and established scholars in the West and East, on all aspects of development and policy in Asia.

The scope of the series is broad, and aims to cover both comparative and single country studies, including work from a range of disciplines.  With particular reference to how Asian states have coped with the growing challenges of globalising economies and the ways in which national governments in Asia have changed their public policy strategies and governance models in order to sustain further economic growth, the series will bring together development studies, and public policy and governance analysis, and will cover subjects such as: economic development; governance models; the factors underpinning the immense economic achievements of different countries; the social, political, cultural, and environmental implications of economic restructuring; public policy reforms; technological and educational innovation; international co-operation; and the fate and political impact of people who have been excluded from the growth.  The series will include both empirical material and comparative analysis; and both single authored books and edited collections.