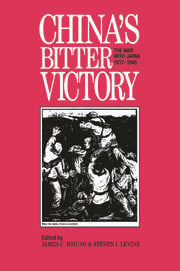 "China's Bitter Victory" is a comprehensive analysis of China's epochal war with Japan. Striving for a holistic understanding of China's wartime experience, the contributors examine developments in the Nationalist, communist, and Japanese-occupied areas of the country. More than just a history of battles and conferences, the book portrays the significant impact of the war on every dimension of Chinese life, including politics, the economy, culture, legal affairs, and science. For within the overriding struggle for national survival, the competition for political goals continued. China ultimately triumphed, but at a price of between 15 and 20 million lives and vast destruction of property and resources. And China's bitter victory brought new trials for the Chinese people in the form of civil war and revolution. This book tells the story of China during a crucial period pregnant with consequences not only for China but also for Asia and the world as well. Addressed to students, scholars, and general readers, the book aims to fill a gap in the existing literature on modern Chinese history and on World War II.

This unique reference traces the changing borders and ethnic balances that characterized the history of Eastern Europe during the twentieth century. After a preliminary overview, the book divides Eastern Europe into five regions, from the Baltic to the Balkans, and closely analyzes the ethnic structure of each region's constituent units over time. Summary chapters at the end of the volume present a comprehensive ethno-demographic portrait of the region at the start of the century, between the two world wars, and from the post-World War II period to the century's end. The volume is richly illustrated with more than sixty figures, hundreds of tables, and multi-lingual indexes of place names and ethnic groups.