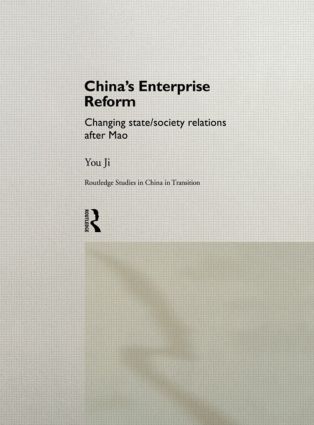 China's basic work units, collectively known as the danwei system, have undergone significant reform, particularly since 1984. The author examines how this system operates and how reform is generating change in the party at grassroots level.

The author demonstrates how China's post-Mao reforms have produced a quiet revolution from below as the process of political and economic liberalization has accelerated. This book presents new research findings that will be invaluable to those wishing to understand the nature of change in China.

'You Ji's study provides an excellent base from which to explore dimensions of change in Chinese workplaces' - Jocelyn E. Gamble, Asia Pacific Business Review, 1998

'Anyone who wants to have a comprehensive and systemic understanding of the changing role of the party, wage reform, and ownership reform in Chinese state enterprises (up until the mid-1990s) will find this book informative and valuable.' - Wenfang Tang, Journal of Asian Studies Vol. 59:4, November 2000