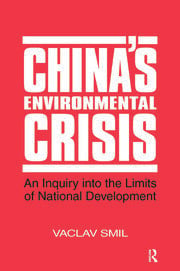 In 1982, Vaclav Smil turned upside down traditional perceptions of China as a green paradise in "The Bad Earth", a disturbing book. This new volume, drawn on a much broader canvas, updates and expands on the basic arguments and perceptions of "The Bad Earth". This book is not a systematic litany of what went wrong and how much - but rather an inquiry into the fundamental factors, needs, prospects, and limits of modern Chinese society, all seen through the critical environmental constraints and impacts.

Race relations in the United States have long been volatile - marked on the one hand by distrust and violence, but tempered on the other by periods of conciliation, integration and relative harmony. This path-breaking blend of history, sociology, political science and economics argues that the key factor determining the quality of race relations is economic: When economic equality spreads so do social and political equality. Conversely, economic downturns and widening income disparities promote political inequality, polarizing blacks and whites. To support this provocative thesis the author examines key events and eras in American history since the Reconstruction - particularly the black migration and the New Deal policies of the interwar years, the civil rights movement of the 1950s and 60s, and the rise and decline of affirmative action in the late twentieth century. He also analyzes the racial policies and politics of the major political parties and shows how they "played the race card" to win support.