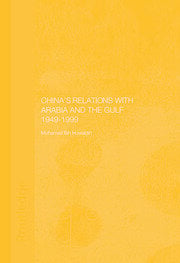 This book provides a detailed analysis of China's foreign policy towards the Gulf and Arabian peninsula region from the establishment of the People's Republic of China in 1949 to the end of the 20th century. Based on extensive original research, it looks at the relations between China and each of the countries of the region over the entire period. It demonstrates that two key factors have shaped China's foreign policy with the region - China's relations with the United States and the Soviet Union, and China's drive to increase its economic ties with the countries of the region, especially after becoming a net importer of oil in the early 1990s.

'The only comprehensive volume available on China's relations with countries of the Gulf and Arabian Peninsula ... scholars working in International Relations, Asian Studies and Politics will find this volume a vital insight to modern Chinese foreign policy.' - The Middle East