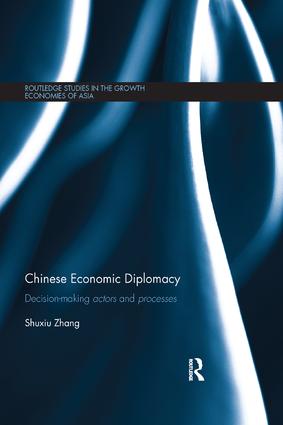 Economic diplomacy was declared in 2013 by Beijing as a priority in its "comprehensive" strategy for diplomacy. The political elite undertook to further invest in economic diplomacy as an instrument for economic growth and development. Globally, Chinese cooperation in multilateral economic processes has become critical to achieving meaningful outcomes. However, little understanding exists in current literature on the factors and mechanisms which shape the processes behind China’s economic diplomacy decision-making.

provides an understanding of the processes and practices of China’s economic diplomacy, with multilateral economic negotiations as the primary basis of analysis, specifically the UN climate change talks and the WTO Doha Round trade negotiations. It examines how early economic diplomacy in global governance contributed to the varied and evolving nature of its present-day decision-making structures and processes. Demonstrating how China’s negotiation preferences are driven by networks of political actors in formal and informal domestic and systemic environments, it also highlights the capacity of international negotiation practices to alter and re-shape China’s approach to multilateral economic negotiations. As a consequence, the book presents a framework for understanding China’s economic diplomacy decision-making processes that is systemically constructed by domestic and international agencies.

Offering a Chinese perspective of the notion of economic diplomacy, this book will be of interest to students and scholars of Chinese Economics, International Relations and Political Economy.

"Chinese Economic Diplomacy: Decision-making actors and processes, provides one of the entry points to discovering China’s secrets to her success story. It provides a step by step nuanced understanding on how China negotiated her place in the existing international order by examining the processes associated with China’s entry into the World Trade Organisation (WTO), and the United Nations Framework Convention on Climate Change (UNFCCC). In portraying these occurrences it also provides a harnessed understanding of the interplay between internal and external forces in determining the economic policy outcome."