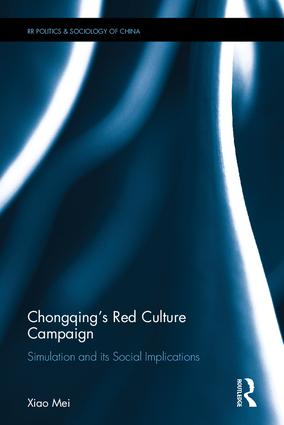 Between 2009 and 2012, the city of Chongqing came into the national, and even international spotlight, as it became the geographical centre of the ‘Singing Red, Smashing Black’ campaign, and later the political storm that swept China. Chongqing’s Red Culture Campaign drew an incredible amount of interest at the time, but speculation and prejudice has since blurred the public understanding of the sensational story that ties the campaign with the rise and fall of a political star, Bo Xilai.

This book, therefore, seeks to study the nature of Chongqing’s Red Culture Campaign, and the interaction between the political programme and the practices of its participants. Based on fieldwork conducted in Chongqing, it seeks to question whether the Red Culture Campaign was actually a return to Maoist revolutionary mass campaigning whilst examining the relationship between the CCP's political power and the lives of the ordinary people as reflected in the case of the campaign. Ultimately, it highlights that the campaign was not in fact a real Maoist mass movement. Although it followed the pre-existing model of past mass campaigns in China, containing a series of frequent and highly performative operations, Xiao Mei argues that it essentially demonstrated critical features of ‘simulation’.

By contributing to our understanding of the discrepancies between a designed political programme, and what it actually becomes when implemented on the ground, this book will be of use to students and scholars of Chinese Studies, Politics and Sociology.

1. Chongqing Under the Spotlight: The ‘Chongqing Model’ and its Controversies

4. Who were the Participants in Chongqing’s Red Culture Campaign?

5. Experiencing the Campaign: Patterns of Practices by the local people in Chongqing

6. How the Official Programme Interacted with the Practices of the Local Participants: Exchange

7. How the Official Programme Interacted with the Practices of the Local Participants: Framing

MEI Xiao is a researcher currently based in Beijing. She obtained her PhD in Sociology from the University of Cambridge.

Routledge Research on the Politics and Sociology of China

The modern Chinese state has traditionally affected every major aspect of the domestic society. With the growing liberalization of the economy, coupled with an increasing complexity of social issues, there is a belief that the state is retreating from an array of social problems from health to the environment. Yet, as we survey China’s social and political landscape today we see not only is the central state playing an active role in managing social problems, but state actors at the local level, and non-state actors, such as social organizations and private enterprises, are emerging.

Coiled in this environment, this book series is interested in examining the politics and sociology of contemporary China. The series will engage with research that explores the intricacies of institutional interactions, and analysis of micro-level actors who are shaping China’s future.

The book series seeks to promote a discourse and analysis that views state and society as contested spaces for power, authority, and legitimacy. As a guiding principle, the series is notably interested in books that utilizes China as a laboratory for confirming, modifying or rejecting existing mainstream theories in politics and sociology.