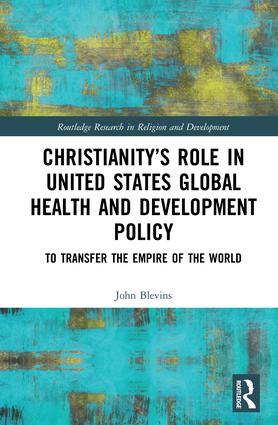 To Transfer the Empire of the World, 1st Edition

In recent years, the role of religion in influencing international health policy and health services provision has been seen as increasingly important. This book provides a social history of the relationship between religion and America's international health policy and practice from the latter 19th century to the present. The book demonstrates that the fields of religion and public health have distinct moral frameworks, each with their own rationales, assumptions, and motivations. While these two frameworks share significant synergies, substantial tensions also exist, which are negotiated in political contexts.

This ambitious study of religion’s social history in the United States over the last 150 years will be of interest to researchers in global health, politics, religion and development studies.

"The influences of religion in the history of the United States are complex and messy. This book is unique in examining those influences in the context of America’s global health and development programs and priorities. For those of us working in the fields of public health and development, it reminds us of a history that we’ve largely forgotten but has lingering consequences; such a reminder equips us to better understand the ongoing influences of religion in our work today and helps us plan and execute our efforts with heightened awareness and sensitivity." -- Sandra Thurman, Chief Strategy Officer in The Office of the U.S. Global AIDS Coordinator and Health Diplomacy, USA

"This book explores how Christianity has influenced America’s role in global health and development over the course of our nation’s existence. The ubiquitous but ever-changing influence of religion illuminates how it combines with scientific and social aspects to provide social good, but also cause potential harm. It is a must read for those concerned with global health policy." -- James Curran, Dean, Rollins School of Public Health, Emory University, USA

"John Blevins has given us a history of the role of American Protestantism as a formative influence on the structures of faith-based organizations that work in the world of global public health and community development. American Protestantism’s deep flaws and soaring accomplishments are on full display in this history of its outreach to many cultures and its building of schools and hospitals around the world.  Blevins’ highly original account brings together both familiar and unfamiliar individuals and helpfully offers us a framework for seeing their work, and the institutions that have resulted from it as evangelism, engineering, and reconstruction. Blevins, who is both a scholar and a practitioner, concludes with a fair-minded assessment of what we should know, and do – now -- to promote global health." -- Ellen Idler, Samuel Candler Dobbs Professor of Sociology, and Director, Religion and Public Health Collaborative, Emory University, USA

"This masterful work is a pathbreaking contribution to the growing scholarship on the role of religion in global health and development practices. This social history fills a major gap in our understanding by skillfully tracing the history of American Protestantism's involvement in this complex and contested set of issues. Anyone interested in the multivalent role of religion in global affairs has to read this book." -- Shaun Casey, Director of the Berkley Center for Religion, Peace, and World Affairs, Georgetown University, USA

1 The Religious Origins of America’s Relationship to the World

2 "Christianity is Adequate to the Work:" Religion and Social Reform in the Progressive Era

5 Blurring the Lines Between Evangelists, Engineers, and Reconstructionists

6 American Protestantism in the Cold War

7 No Longer on the Mainline: Other Christianities, Other Religions, and No Religion

8 Not "either/or" but "both/and": On Seeing International Health and Development as a Tragic Profession… and Why That Should Give Us Hope

John Blevins is an Associate Research Professor and Acting Director of the Interfaith Health Program at the Hubert Department of Global Health, Rollins School of Public Health, Emory University, USA

Routledge Research in Religion and Development

The Routledge Research in Religion and Development series focuses on the diverse ways in which religious values, teachings and practices interact with international development.

While religious traditions and faith-based movements have long served as forces for social innovation, it has only been within the last ten years that researchers have begun to seriously explore the religious dimensions of international development. However, recognising and analysing the role of religion in the development domain is vital for a nuanced understanding of this field. This interdisciplinary series examines the intersection between these two areas, focusing on a range of contexts and religious traditions.