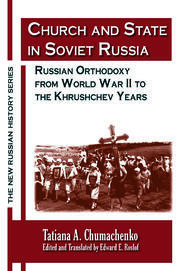 Church-state relations during the Soviet period were much more complex and changeable than is generally assumed. From the German invasion of the Soviet Union in 1941 until the 21st Party Congress in 1961, the Communist regime's attitude toward the Russian Orthodox Church zigzagged from indifference and opportunism to hostility and repression. Drawing from new access to previously closed archives, historian Tatiana Chumachenko has documented the twists and turns and human dramas of church-state relations during these decades. This rich material provides essential background to the post-Soviet Russian government's controversial relationship to the Russian Orthodox Church today.

The Stalin era has been less accessible to researchers than either the preceding decade or the postwar era. The basic problem is that during the Stalin years censorship restricted the collection and dissemination of information (and introduced bias and distortion into the statistics that were published), while in the post-Stalin years access to archives and libraries remained tightly controlled. Thus it is not surprising that one of the main manifestations of glasnost has been the effort to open up records of the 1930s. In this volume Western and Soviet specialists detail the untapped potential of sources on this period of Soviet social history and also the hidden traps that abound. The full range of sources is covered, from memoirs to official documents, from city directories to computerized data bases.