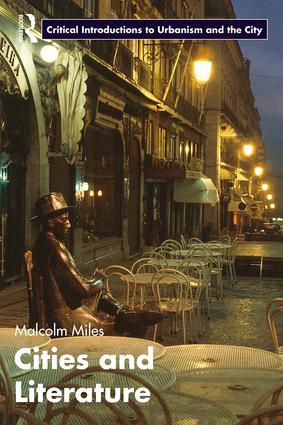 This book offers a critical introduction to the relation between cities and literature (fiction, poetry and literary criticism) from the late eighteenth to twenty-first centuries. It examines examples of writing from Europe, North America and post-colonial countries, juxtaposed with key ideas from urban cultural and critical theories.

Cities and Literature shows how literature frames real and imagined constructs and experiences of cities. Arranged thematically each chapter offers a narrative which introduces a number of key thinkers and writers whose vision illuminates the prevailing idea of the city at the time. The themes are extended or challenged by boxed cases of specific texts or images accompanied by short critical commentaries; the structure provides readers with a map of the terrain enabling connections across time and place within manageable limits, and offers elements of critical discussion to serve a growing number of university courses which involve the intersections of cities and literature.

This volume offers access to literature from an urban perspective for the social sciences, and access to urbanism from a literary viewpoint. It is an excellent resource for both undergraduate and postgraduate students in the fields of urban studies and English literature, planning, cultural and human geographies, architecture, cultural studies and cultural policy.

"Moving among canonical and forgotten texts and cultural theory about the modern (Western) city, Malcolm Miles shows literature's importance to the ways we imagine and experience urban space and city life, and why the questions that activity raises matter beyond the classroom. His attention to avant gardes and their milieus is a particularly welcome addition to the discussion and of a piece with his presiding focus on the city as an institution of culture." - Kevin McNamara, Professor of Literature, University of Houston-Clear Lake, USA

"Restless, wide-ranging and always intellectually challenging, in this book Malcolm Miles takes us on an journey through Western cities across the last three centuries by examining a sequence of novels and poems written by the likes of Austen, Eliot (George, aka Mary Anne Evans), Eliot (Thomas Stearns), Woolf, Camus and DeLillo. In doing so, he elicits a strong dialectic: cities as the locus for modern literature under Capitalism, and literature as expressive of the negative and positive aspects of Capitalist urban life. Rarely have such insights been so refreshingly expressed as in this book. Self-evidently a labour of love, it also offers a superb summation of Miles’s own writings over the years." - Professor Murray Fraser, Bartlett School of Architecture, University College London, UK

Malcolm Miles is a researcher and writer on critical theories of culture and society, urbanism and contemporary art. Among his publications are Cities and Culture (2007), Limits to Culture (2015), Eco-Aesthetics: art, literature and architecture in a period of climate change (2014) and Herbert Marcuse: an aesthetics of liberation (2011). He retired as Professor of Cultural Theory in the Architecture School, University of Plymouth, UK, in 2016.

Routledge Critical Introductions to Urbanism and the City