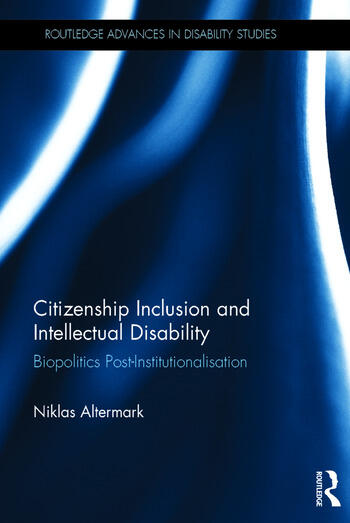 What happens when a group traditionally defined as lacking the necessary capacities of citizenship is targeted by government programs that have made ‘citizenship inclusion’ their main goal? Combining theoretical perspectives of political philosophy, social theory, and disability studies, this book untangles the current state of Western intellectual disability politics following the replacement of state institutionalisation by independent and supported living, individual rights, and self-determination.

Taking its cue from Foucault’s conception of ‘biopolitics’, denoting the government of the individuals and the totality of the population, its overarching argument is that the ambiguous positioning of people with intellectual disabilities with respect to the ideals of citizenship results in a regime of government that simultaneously includes and excludes people of this group. On the one hand, its members are projected to become ideal-citizens via the cultivation of citizenship capacities. On the other, the right to live independently and by their own choices is curtailed as soon as they are seen as failing with respect to the ideals of reason and rationality. Therefore, coercion, restraints, and paternalism, which were all supposed to end with deinstitutionalisation, are still ingrained in services targeting the group.

In equal parts a theoretical work, advancing debates of critical disability theory, social theory, and post-structural philosophy, as well as an empirical engagement with the history of intellectual disability politics and the ways in which present day politics target the group, this book will be of interest to all students and scholars of disability studies, disability politics, and political theory.

Niklas Altermark is a researcher at the Department of Political Science at Lund University. His work focuses on ideas revolving around vulnerability, as a grounds for exclusion but also as a resource of critical theory, in order to understand the historical and present government of groups that are judged to be deviating. Altermark’s articles have for example appeared in Disability & Society and Review of Disability Studies – An International Journal. Lately, he has been engaged in the Swedish struggle against austerity measures striking down on people with disabilities, chronic illnesses, and mental health conditions.

'Making no humanist friends, Altermark's outstanding book disseminates the very ideals of citizenship that are peddled in the name of social inclusion but are revealed to be of the most pernicious kinds of thought that render people with intellectual disabilities surplus to requirements. Read this. Read it now.' - Daniel Goodley, Director of Research, The Universtiy of Sheffield