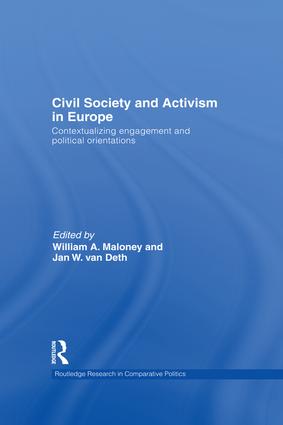 Civil Society and Activism in Europe

This book examines the role of civil society organizations in several advanced European democracies: Germany, the Netherlands, Spain, Switzerland and the United Kingdom. Specifically the book focuses on how voluntary organizations contribute to civic and democratic health and assesses the impact of different organizational types on social capital.

Building on Citizenship and Involvement in European Democracies and Social Capital and Associations in Europe (2007), this volume seeks to widen and deepen the analysis by introducing new data on activists and combining it with the organizational data and the population data. It evaluates the impact of the organizational context on individual activity profiles and attitudes and values of activists and provides a unique assessment on the contribution that voluntary associations make to civil and democratic society. Part One deals with the consequences of associational involvement for several attitudinal and behavioural orientations and Part Two expands the scope of the effects of voluntary associations towards European attitudes.

This book is essential reading for students and scholars of civil society, democracy, political participation, politics and sociology.

William Maloney is Professor of Politics and Deputy Head of School (Politics) in the School of Geography, Politics and Sociology, Newcastle University (UK). His main research interests are in the areas of interest group politics (internal and external dynamics), social capital, political involvement and nonparticipation. He has published extensively in these areas and his recent publications include: The Politics of Organized Interests in Europe: the state of the art, a special issue of West European Politics (December, 2008) vol. 31 no. 6, (co-edited with Jan Beyers and Rainer Eising); Civil Society and Governance in Europe: From National to International Linkages. (co-edited with van Deth, Cheltenham: Edward Elgar, 2008); Interest Groups and the Democratic Process: Enhancing Participation? (co-authored with Grant Jordan) (Houdmills etc.: Palgrave, 2007); and Social Capital and Associations in European Democracies: A Comparative Analysis (co-edited with Sigrid Roßteutscher, London: Routledge, 2007).

Jan W. van Deth (1950) is Professor of Political Science and International Comparative Social Research at the University of Mannheim (Germany). His main research areas are political culture (especially social capital, political engagement, and citizenship), social change, and comparative research methods. He was Director of the Mannheim Centre for European Social Research (MZES), convenor of the international network Citizenship, Involvement, Democracy (CID) of the European Science Foundation, and Book Series Editor of the Studies in European Political Science of the European Consortium for Political Research (ECPR). He is a Corresponding Member of the Royal Netherlands Academy of Arts and Sciences (KNAW) and national coordinator of the German team for the European Social Survey. Recent publications include Civil Society and Governance in Europe. From National to International Linkages (edited with William Maloney; Cheltenham: Edward Elgar, 2008).