Classic Readings and Cases in the Philosophy of Law 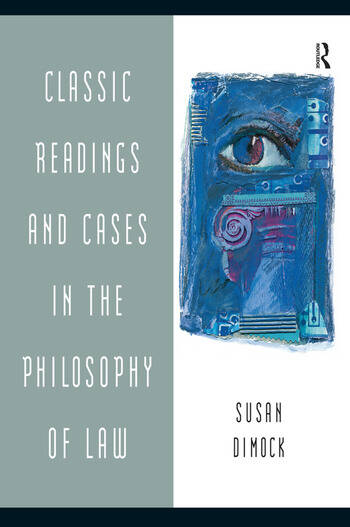 Classic Readings and Cases in the Philosophy of Law

With over sixty cases as support, this text presents the philosophy of law as a perpetual series of debates with overlapping lines and cross connections. Using law as a focus to bring into relief many social and political issues of pressing importance in contemporary society, this book encourages readers to think critically and philosophically.

Classic Readings and Cases in the Philosophy of Law centers on five major questions:

What is law?
What, if any, connection must there be between law and morality?
When should law be used to restrict the liberty of individuals?
To what extent should democratic states permit civil disobedience?
What, if anything, justifies the infliction of punishment on those who violate the law?

The extensive anthology of cases covers the mundane to the grandest of constitutional issues, including controversial topics like ownership of genetic material, capital punishment, and gay rights. Brief introductions to each case describe the central issue being litigated, the legal reasoning of the justices–both majority and dissenting–the decision of the court, and its philosophical significance.

Oliver Wendell Holmes, Law as Systematized Prediction of What the Courts Will Do

Jerome Frank, Law as the Product of Court Decisions

Chapter 4: Legal Positivism II: Law as the Union of Primary and Secondary Rules

H.L.A. Hart, Law as the Union of Primary and Secondary Rules

Moore v. Regents of the University of California

Chapter 7: The Separation of Law and Morality

H.L.A. Hart, Positivism and the Separation of Law and Morals

Chapter 8: The Morality of Law

The Morality that Makes Law Possible

Chapter 9: Law as a System of Rights

Chapter 11: Law as an Indeterminate Patchwork of Irreconcilable Ideologies

Critical Legal Studies and the Rule of Law

Brown v. Board of Education

PART 3: CIVIL DISOBEDIENCE AND THE OBLIGATION TO OBEY LAW

Chapter 12: The Duty to Oppose Injustice

Chapter 15: Civil Disobedience and the Presumption of an Obligation to Obey the Law

Chapter 16: In Defense of Liberty

Chapter 19: A Refutation of Legal Moralism

Jeremy Bentham, An Introduction to the Principles of Morals and Legislation

Chapter 21: Retributivism I: A Kantian Theory of Punishment

Immanuel Kant, The Right of Punishing and Pardoning

The Insanity Defense: M’Naghten and Durham

Chapter 26: The Moral Reading of the American Constitution

Ronal Dworkin, The Moral Reading of the American Constitution

Selections from the Canadian Charter of Rights and Freedoms