Classical Recording
A Practical Guide in the Decca Tradition 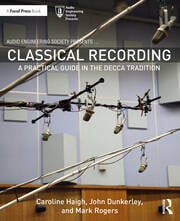 Classical Recording: A Practical Guide in the Decca Tradition

Classical Recording: A Practical Guide in the Decca Tradition

is the authoritative guide to all aspects of recording acoustic classical music. Offering detailed descriptions, diagrams, and photographs of fundamental recording techniques such as the Decca tree, this book offers a comprehensive overview of the essential skills involved in successfully producing a classical recording. Written by engineers with years of experience working for Decca and Abbey Road Studios and as freelancers, Classical Recording equips the student, the interested amateur, and the practising professional with the required knowledge and confidence to tackle everything from solo piano to opera.

PART I – Before Recording

PART III – After The Recording Session

Caroline Haigh grew up with equal love for music, maths, and physics and combined study of all of them on the Tonmeister course at the University of Surrey. She began her career in classical post-production working for Decca during her final year at University, and stayed there for several years before moving around the corner to Abbey Road Studios (EMI) in 1996. At both Decca and EMI, she gained experience with countless major classical artists and became a sought-after and skilful editor, working on several Grammy award-winning albums, including Les Troyens (Decca –  OSM/Dutoit) Best Opera 1995. Having enjoyed giving guest seminars at the University of Surrey during her time at Abbey Road, Caroline was recruited to teach on the Tonmeister course on a permanent basis from 2009. She currently teaches recording techniques, production/post-production skills and electro-acoustics (microphones), and she continues to work as a freelance classical editor.

is one of the world’s most highly respected and emulated classical recording engineers. Throughout a long career at Decca and then as a freelancer, his recordings have been renowned for their ravishingly beautiful sound and attention to detail. He has worked with almost all the major artists of the last 40 years, has made over a thousand CDs, and his recordings have earned over 15 Grammy awards. John is one of the last engineers alive to have learnt his craft from the great Kenneth Wilkinson, the inventor of many of the techniques that underpin the classical recording art. John teaches workshops at the University of Surrey, at the Banff Centre, and at the Abbey Road Institute.

studied on the Tonmeister course at the University of Surrey. He began his career working with John Dunkerley at Decca, and then spent nine years around the corner at EMI’s Abbey Road Studios, where he was the chief technical engineer for Studio One, famous for its orchestral and film score recordings. Here he worked with hundreds of different producers and engineers and gained a unique insight into the huge variety of techniques used in classical recording. In 2000 he moved to a management role at Warner Music, and after four years left to become a freelance recording producer, engineer, and musician. Since then he has worked for a wide variety of clients, including the Royal Opera House, Covent Garden, and back where he started at Decca, and his recordings have won many accolades, including a Grammy award in 2009. Mark is a visiting lecturer at the University of Surrey.

'I cannot imagine a more comprehensively written book about the principles and practicalities of the Decca approach to recorded sound. It is packed with useful facts. The book is essential reading not only for students but also anyone with a true interest in the art and science of recording music is such a way that it connects with the listener. This book will remain relevant for decades to come.' - Simon Eadon, Abbas Records

'This book distils the thoughts and techniques from the pioneers of the business into a definitive reference book for anyone who works in recording or has a passion for recorded music. Wherever you use a microphone, from drum kits to Mahler’s 8th symphony, from bathrooms to concert halls, you’ll discover a wealth of techniques and set ups to help deliver the best musical experience from the kit you have. My aim when recording and mixing is to aim for a specific sound which I hear inside; a specific identity and character which works hand-in-hand with the music. This book is the springboard to help anyone achieve that goal.' - Jonathan Allen

'This is just the sort of book I wished I'd owned when I was starting out 30 years ago!' - Simon Rhodes, Senior Engineer, Abbey Road Studios

'The authorship(s) from three Decca experts draw on their impressive and vast experience to illuminate one of the greatest traditions of classical recording. This book will become the necessary reference for any engineer or producer wishing to gain an understanding of the timeless techniques that can be employed in any modern recording.' - Peter Cobbin and Kirsty Whalley, Such Sweet Thunder