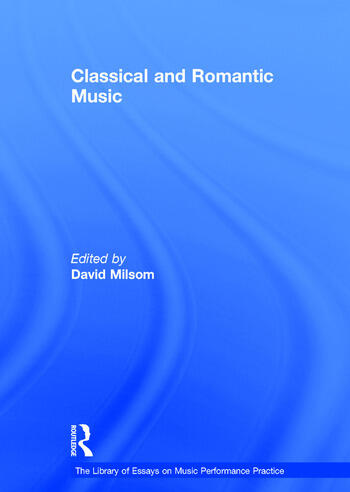 This volume brings together twenty-two of the most diverse and stimulating journal articles on classical and romantic performing practice, representing a rich vein of enquiry into epochs of music still very much at the forefront of current concert repertoire. In so doing, it provides a wide range of subject-based scholarship. It also reveals a fascinating window upon the historical performance debate of the last few decades in music where such matters still stimulate controversy.

David Milsom, who has written widely on nineteenth-century performing practice, is the author of Theory and Practice in Late Nineteenth-Century Violin Performance 1850-1900 (Ashgate, Aldershot, 2003). He is an active violinist and violist, specialising in late nineteenth-century violin performing practice and an experienced instrumental teacher. He is a lecturer in music at the University of Huddersfield.