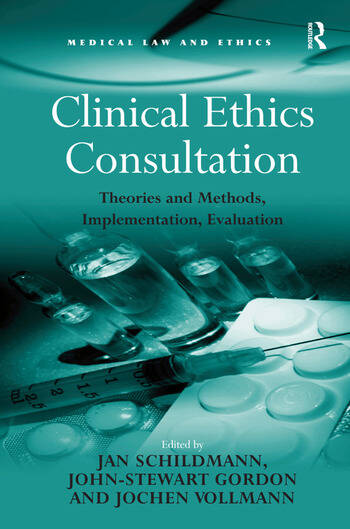 This volume brings together researchers from different European countries and disciplines who are involved in Clinical Ethics Consultation (CEC). The work provides an analysis of the theories and methods underlying CEC as well a discussion of practical issues regarding the implementation and evaluation of CEC. The first section deals with different possible approaches in CEC. The authors explore the question of how we should decide complex cases in clinical ethics, that is, which ethical theory, approach or method is most suitable in order to make an informed ethical decision. It also discusses whether clinical ethicists should be ethicists by education or rather well-trained facilitators with some ethical knowledge. The second chapter of this book focuses on practical aspects of the implementation of CEC structures. The analysis of experienced clinical ethicists refers to macro and micro levels in both developed and transitional countries. Research on the evaluation of CEC is at the centre of the final chapter of this volume. In this context conceptual as well as empirical challenges with respect to a sound approach to judgements about the quality of the work of CECs are described and suggestion for further research in this area are made. In summary this volumes brings together theorists and healthcare practitioners with expertise in CEC. In this respect the volume serves as good example for a multi- and interdisciplinary approach to clinical ethics which combines philosophical reasoning and empirical research.

Jan Schildmann, MA, MD, is a researcher in medical ethics and a physician. Following his medical studies at the Charité Medical School, Berlin, he received his MA in Medical Law and Ethics from King's College, University of London. After completing his clinical training in medical oncology and palliative care, he joined the Department of Medical Ethics and History of Medicine, Ruhr University Bochum, as a researcher in medical ethics. Dr Schildmann has published on the ethics of end-of-life care issues, the physician-patient relationship and the teaching of ethics and communication in medicine in the Journal of Medical Ethics, Medicine Healthcare and Philosophy, Palliative Medicine and several other journals. In addition he has co-edited three books on end-of-life decision making, clinical ethics and clinical ethics consultation. He has been a visiting researcher at the Centre for Ethics and Communication in Health Care Practice, University of Oxford (ETHOX). Dr Schildmann has received several awards including a prize of the European Association for Philosophy in Healthcare and Medicine, an Award of Best Practice on communication in oncology and a prize of the International Balint Federation. John-Stewart Gordon, MA. in philosophy and history at Konstanz University (2001), Ph.D. in philosophy at GÃ¶ttingen University (2005). Currently, he is Adjunct Assistant Professor in philosophy at Queen's University in Kingston, Canada. He is member of the board of Bioethics and area-editor of The Internet Encyclopedia of Philosophy (IEP). He published two books as a single author Aristoteles Ã¼ber Gerechtigkeit. Das V. Buch der Nikomachischen Ethik (Alber Press 2007) and Bemerkungen zum BegrÃ¼ndungstrilemma (Lit Press 2007). Furthermore, he is single editor of Morality and Justice (Rowman&Littlefield 2009) and co-editor of Bioethics and Culture (Cambridge University Press 2010). In addition, he published peer-reviewed articles in journals/encyclopedia such as Bioethics, Journal for Business, Economics, and Ethics or IEP. He taught philosophy and bioethics at TÃ¼bingen University, Ruhr-University Bochum, Duisburg-Essen University, and Queen's University Kingston. Jochen Vollmann, MD, PhD, is Professor and Director of the Institute for Medical Ethics and History of Medicine and Chair of the Centre for Medical Ethics, Ruhr-University Bochum, Germany. He completed a clinical training in psychiatry and psychotherapy at the University Hospitals in GieÃŸen, Munich and Freiburg, and wrote his habilitation thesis on ethical problems of informed consent in psychiatry at the Free University of Berlin. Prof. Vollmann was Visiting Fellow at the Kennedy Institute of Ethics, Georgetown University, Washington DC (1994/1995), Visiting Professor at the University of California at San Francisco School of Medicine and at the Mount Sinai School of Medicine, New York (1999/2000), at the Institute for the Medical Humanities UTMB (2001) and at the Centre for Values, Ethics and the Law in Medicine at the University of Sydney (2004, 2008 and 2009). He was honoured with the Prize for Brain Research in Geriatrics by the University of Witten/Herdecke in 1999 and with the Stehr-Boldt-Prize for Medical Ethics of the University of ZÃ¼rich in 2001. Prof. Vollmann's research interests include informed consent and capacity assessment, ethics and psychiatry, end-of-life decision-making, advance directives, medical professionalism, clinical ethics committees and clinical ethics consultation.

'The book clearly deserves to be read by most people interested in doing or setting up CEC. Furthermore, I believe that researchers and teachers within this field will find the book very interesting and stimulating.' Bioethics 'In sum, the book gives a rich and well-balanced overview. It is definitely appropriate for researchers, scientists, and healthcare professionals, who either engage or want to engage in the field. Clinical Ethics Consultation started out in the United States in the early 1970s. Forty years later, this volume clearly shows the academic evolution of the field.' Medicine, Health Care and Philosophy