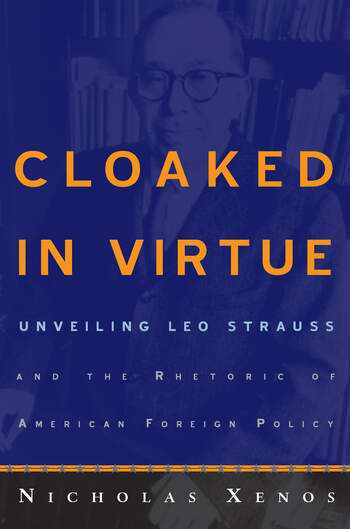 Cloaked in Virtue: Unveiling Leo Strauss and the Rhetoric of American Foreign Policy

It is now commonly acknowledged that numerous key players in and around the Bush administration’s planning of the Iraq invasion were connected through a common background in the political philosophy of Leo Strauss, a German-born University of Chicago professor who died in 1973. These Straussian "neocons" were held responsible for exploiting the September 11th attacks in order to further their own foreign policy agenda. Cloaked in Virtue is the first book to take a critical view of the political ideas of Leo Strauss himself by careful attention to his own writings before and after his emigration to the United States. The result is a critical examination of the political theory of Leo Strauss, lifting the veil of intentional obfuscation, and its influence on the neoconservative foreign policy of the George W. Bush administration.

This book will be of interest to students and scholars of politics and international relations.

Nicholas Xenos is Professor of Political Science at the University of Massachusetts at Amherst.

'Cloaked in Virtue offers a political analysis of Leo Strauss and his network of acolytes that—for once—doesn't mince words. Its careful and erudite critique of Strauss' writings, their paralytic influence on political theory and their baleful impact on the most reactionary set of policy makers in recent memory, is of exceptional importance in the aftermath of 9/11 and the disastrous invasion of Iraq. Nicholas Xenos is to be congratulated.' - Stephen Eric Bronner, Author of Reclaiming the Enlightenment, Rutgers University, USA

'Countless books and NYT, NYRB and WSJ articles insist that there is no link between the philosophic teachings of Leo Strauss and the unscrupulous political policies of the Bush-Cheney administration. Nicholas Xenos's astounding new book raises serious questions concerning such assertions. Meticulously researched and soberly argued, this work traces a direct line from Strauss's writings from the 1920s and 1930s that criticized liberal democracy to the policy choices of his politically engaged contemporary devotees. Most commendably, Xenos reads these works on their own terms, rather than, as Strauss's students do, by using as a guide what Strauss said about them after he immigrated to the United States.' - John P. McCormick, University of Chicago, USA

'For years, followers of Leo Strauss have been privately celebrating his influence on the higher echelons of the American foreign policy establishment while publicly claiming their mentor was a disinterested scholar, with little interest in contemporary politics. In Cloaked in Virtue, Nicholas Xenos carefully reconstructs both Strauss’s political thought as well as its worrisome, antidemocratic policy implications, thereby dismantling the prophylactic myths that Strauss’s disciples have propagated in order to immunize the Master against all manner of critical scrutiny. The end result is an interpretive tour de force: required reading for all those who are interested in the vital nexus between politics and the history of ideas.' - Richard Wolin, City University of New York, USA