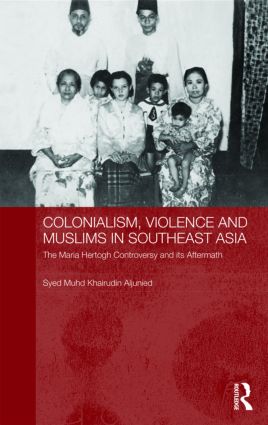 The Maria Hertogh Controversy and its Aftermath, 1st Edition

This book deals with the genesis, outbreak and far-reaching effects of a legal controversy and the resulting outbreak of mass violence, which determined the course of British colonial rule after post World War Two in Singapore and Malaya. Based on extensive archival sources, it examines the custody hearing of Maria Hertogh, a case which exposed tensions between Malay and Singaporean Muslims and British colonial society. Investigating the wide-ranging effects and crises faced in the aftermath of the riots, the analysis focuses in particular on the restoration of peace and rebuilding of society.

The author provides a nuanced and sophisticated understanding of British management of riots and mass violence in Southeast Asia. By exploring the responses by non-British communities in Singapore, Malaya and the wider Muslim world to the Maria Hertogh controversy, he shows that British strategies and policies can be better understood through the themes of resistance and collaboration. Furthermore, the book argues that British enactment of laws pertaining to the management of religions in the post-war period had dispossessed religious minorities of their perceived religious rights. As a result, outbreaks of mass violence and continual grievances ensued in the final years of British colonial rule in Southeast Asia - and these tensions still pertain in the present.

This book will be of interest to scholars and students of law and society, history, Imperial History and Asian Studies, and to anyone studying minorities, and violence and recovery.

'Khairudin Aljunied has done a great deal to illuminate the background to this controversy and analyse the response of the colonial government to the unexpected crisis which still has a profound impact to this day on the political leadership of Singapore.'- Imran Andrew Price, Centre for Contemporary Islamic Studies in Singapore.

'This work is refreshingly innovative, provocative…]…[The author effectively deciphers the surveillance strategy used by the colonial administration and provides a useful insight into the reconciliation and reform process conducted by the British to overcome the weaknesses laid bare by the Hertogh riots. And it is here that this book makes a substantive contribution to the existing literature on the controversy. The workings and responses of the colonial state machinery are carefully scrutinised and evaluated within a theoretical construct.' - Joseph M. Fernando, Journal of the Malaysian Branch of the Royal Asiatic Society, 2009

'…Aljunied himself did not begin his doctoral research, upon which his book is based, with the intention of studying the aftermath; his governing desire initially was to study the complex set of causes which had led to the violence, as previous commentators had done. Aljunied’s encounters in the field – his rebuff by the gatekeepers of the Singapore archives, his reading of the wider literature on mass violence and most importantly the trails which the colonial records led him – shifted his approach from the prelude to the event to its epilogue. In doing so Aljunied has framed a new research question and made an important contribution to Singapore historiography.' - Loh Kah Seng, Institute of Southeast Asian Studies, August 2009

'This book is certainly a welcome addition to the historiography of the Maria Hertogh episode. The treatment is original and comprehensive. It goes beyond the issue of religious grievance, even though many consider the most important cause of the riots. The author has admirably achieved his objective which is "to shift beyond the study of the causes of the riots towards a deeper examination of the wide-ranging effects and crises faced in the aftermath" (p. 3). It is well-researched and documented. The application of theory is not heavy-handed. The study has contemporary relevance.' - Asian Journal of Political Science, 2009

'This detailed and subtly argued case study is a valuable contribution to our understanding of the late colonial regime in Singapore and to the literature on riots in Southeast Asia.' - A.J. Stockwell, Royal Holloway, University of London, Aseasuk News no. 46 Autumn 2009

'With its careful examination and assessment of these various factors, Colonialism, Violence and Muslims in Southeast Asia forms a valuable contribution to a growing body of scholarship on the recent history of Singapore and the role of religion in Southeast Asia in which regional scholars are actively participating. Holding important lessons for the understanding of contemporary Islam in other urbanised pluralist settings beyond the Southeast Asia city-state of Singapore, this book will therefore not only appeal to historians but also to Islamicists, legal anthropologists and other social scientists with an interest in Southeast Asian Islam.' - Carool Kersten, 2009

'The author of this book skilfully connects the riots, popularly known as the Maria Hertogh Controversy, with colonialism and the British failture to understand matters concerning the Muslims under their administration. […] The book is a pleasant read and the author has successfully utilised a large corpus of primary and secondary sources to show that the Maria Hertogh riots in Singapore and their aftermath mirror similar anticolonial incidents and colonial responses elsewhere.' -- Badriyah Haji Salleh, Universiti Sains Malaysia, South Asian Studies, 43:1, (2012)

Syed Muhd Khairudin Aljunied is Assistant Professor at the National University of Singapore. His research interests include Colonial History, the History of Ideas, Ethnic Minorities and Social Identities.