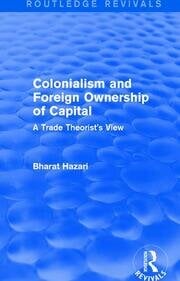 First published in 1982. Foreign control of capital is a major problem for many developing countries and can lead to the exercise of a form of colonial control whereby capital is provided for political rather than economic reasons. This book discusses the implications of this phenomenon for trade theory and the amount of pressure that foreign countries can exert. The opening chapter examines the themes of de-industrialisation, of stagnation after an initial spurt in economic activity, and the premise that inflows of capital do not necessarily generate growth and expansion. These initial discussions are developed in the subsequent chapters where the effects of foreign ownership on the host country’s economy and trade are dealt with fully. This work would be of interest to students of economics and development.