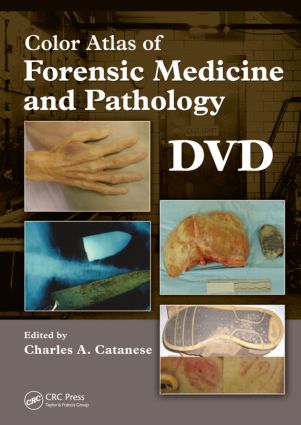 Edited by Charles A. Catanese

This DVD version of the Color Atlas of Forensic Medicine and Pathology features cases from the New York City medical examiner’s office, one of the busiest in the U.S. Because of the number of autopsies performed at this office, the range of examples is exhaustive. The topics covered include typical gunshot wounds, blunt and sharp force trauma, natural diseases with forensic ramifications, accidental deaths occurring in a therapeutic setting, and non-fatal pathologies. The electronic version of this text provides over 1200 color photographs that address both civil and criminally oriented cases. The DVD allows for even easier access to critical information needed by medical examiners.

The photographs are very clear and informative. In all there are about 1500 pictures covering the whole panorama of forensic pathology …forensic pathologists, especially the younger ones at the start of their careers … can benefit from the personal case photographs of their more experienced counterparts… The color atlas and DVD set can be heartily recommended to all forensic pathologists … a significant addition to the literature … —Anil Aggrawal's Internet Journal of Forensic Medicine and Toxicology, Volume 11, Number 1, January - June 2010

Sudden Natural Death in a Forensic Setting, Charles A. Catanese and Amy Rapkiewicz

Substance Abuse and Poisoning, Charles A. Catanese and Laura Labay